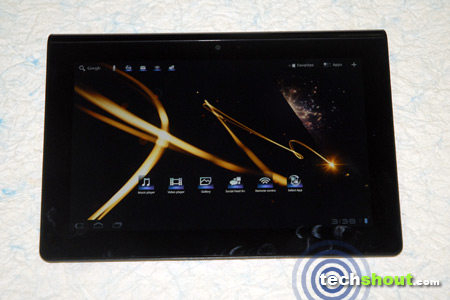 A lot of manufacturers venturing into the tablet market have been going for the Android OS and the Sony Tablet S we’ve picked up for a review is no exception to that trend. And why would it be? Google’s mobile platform appears to be quite popular and the fact that it provides a specific design that’s optimized for large screens seems like a viable way to present such devices. Well, the Tokyo based electronics manufacturer may have come a bit late into the slate market, but the time they’ve taken to build this 9.4-inch device has certainly awarded it a distinct look as well as feel, when compared to similar gadgets. However, the design isn’t all that’s important. So what we’re going to do here is break things down to its offerings with respect to entertainment, hardware and the derivable performance. 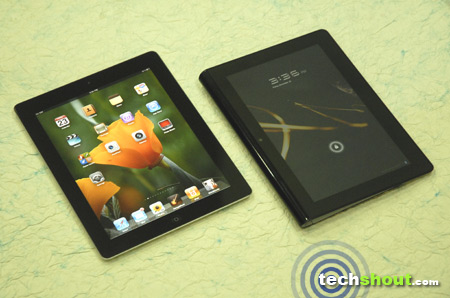 When it comes to the design of the Sony Tablet S, the company has strayed off the beaten path. From the front, the device appears like any other gadget would within the same segment. However, it’s what lies beneath the display that makes the most difference. If you were to hold it in the landscape orientation and gradually flip the tablet over, the hard plastic body is smoothly curved inward just above the screen. Furthermore, it continues down towards the lower end of the device, giving it a tapering look. For a better idea, picture a magazine or any book for that matter, with a few pages folded back and held in place like that. 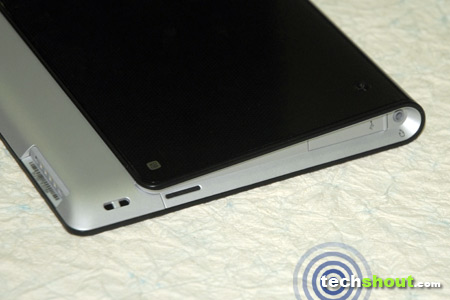 Not only does the Sony Tablet S flaunt an elegant look, but its body is also specifically crafted out to make it incline to one side, which in return provides an efficient way of viewing videos or typing documents whilst the device rests on its back. In addition to that, 2 rubber pegs on its rear deliver a firm grip and keep it in place on almost any type of surface. Finger grease is one of the major problems most users face whilst accessing handheld gadgets. And to worsen things, the Tablet S seems to have a penchant for smudges. Well, wiping them off consumed a lot of our time and it led us to just give up and accept the screen partially covered in smears at all times. 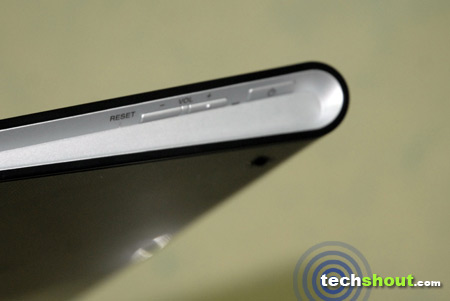 Sony may have glamorized the entire parcel, but its contents left us rather unsatisfied. Firstly, it sported a number of guides to get us familiar with everything along with a warranty card and a power adapter. These are all fine; however a USB cord and maybe earphones wouldn’t hurt at all. While moving along the side panels, we came across a 3.5mm audio jack and a special compartment that encloses a microUSB port as well as a full sized SD card slot. Moreover, the right houses volume controls and a power button which can also be used to put the device into sleep mode. There was a set of stereo speakers placed on each side too. Unlike most tablets that juice up through a USB cord, the Tablet S comes with a dedicated charging port and a special adapter. The final observable components included a front facing VGA camera along with a 5MP rear facing one. 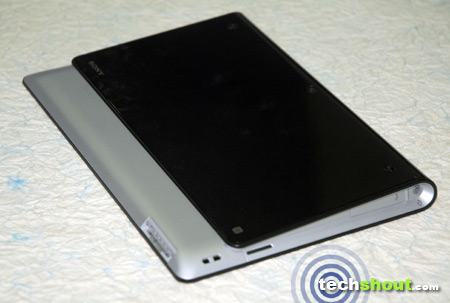 The beauty of the Sony Tablet S doesn’t only rely on its exterior. There’s some serious hardware packed under its hood. Based on its specifications sheet, the gadget employs a dual core Nvidia Tegra 2 processor and 1GB of RAM. By the looks of things, almost any application or game should run smoothly on it. For connectivity, we’ve got Bluetooth version 2.1, Wi-Fi b/g/n and DLNA support. The 9.4-inch display portrays a resolution of 1280 x 800 pixels and to compliment it is a 5000mAh Li-ion battery. With 16GB of memory built in, the available storage amounted up to around 11GB. Just so that you may know, the full sized SD slot isn’t for memory expansion. In fact, its main purpose is for file transfers. All these aforementioned components are fitted within dimensions of around 9.5″ x 6.8″ x 0.3″ and it gives the device a total weight of around 595 grams.

Implementation of the OS 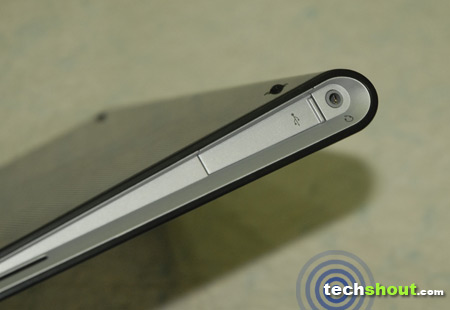 Owing to the Google OS’s highly customizable nature, companies can recreate the interface in any way they desire. And Sony hasn’t wasted the opportunity to take advantage of this feature by adding a little something of its own. We were presented with 6 customizable homescreens that were really convenient to browse through. However, scrolling through menus was a bit troublesome due to a slightly sluggish UI. We encountered a few lags and the transition between applications could use a little more tweaking. At times, poor implementation of the OS could lead to such problems. But it’s nothing a software update can’t handle. 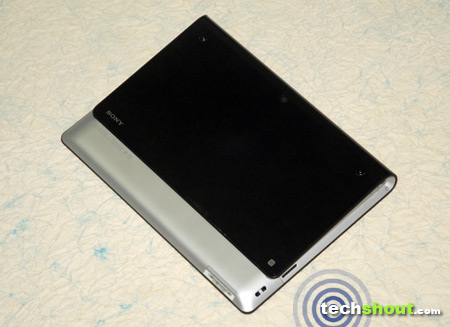 On unboxing the Sony Tablet S, the first thing we did was plug it into a wall socket to get the battery juiced up. Just 10 minutes into charging and we noticed that it was already heated up unusually. Even after being set at full brightness, watching movies wasn’t too much fun either, all thanks to the finger grease covering the display. However, in low light conditions, we had a splendid time viewing HD videos. And the stereo speakers located on either side only added to the entire experience. Owing to the Nvidia Tegra 2 processor put to work within this device, we spent quite some time playing games such as Riptide GP and Galaxy on Fire 2 THD, optimized specifically for this particular chipset. Unlike the slow interface, these titles ran seamlessly without any sort of interruptions. So we’re convinced it’s a software related problem. To end things, an approximate of 7 hours of activity time is what we derived from the tablet. This includes web browsing, gaming and media playback on a single charge.

The remote control application is easy to setup and worked successfully on our HDTV.

The combination of a well crafted body and a lightweight form factor has surely earned our goodwill. The design makes it convenient to hold with one hand as the rough rear surface provides a good grip.

The rear facing camera could perform better with LED flash. Furthermore, the image and video we obtained fared poorly.

The Wi-Fi connection dropped frequently and at times, refused to even connect.

For a device hoarding the Nvidia Tegra 2 processor and 1GB of RAM, the Sony Tablet S doesn’t meet up to our full expectation. However, in spite of the few drawbacks faced, we’re sure that most of these issues are fixable. To sum it up, the design is quite inspirational and audio quality emitted through the stereo speakers is truly delightful. So based on these factors, this tablet makes one decent entertainment companion and deserves an 8 out of 10 rating.