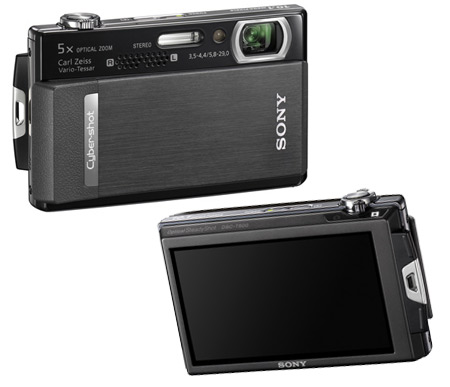 The camera’s movie function is based on the MPEG4 AVC/H.264 codec for video compression and stereo audio. The T500 is capable enough to record a video clip up to 10 minutes in length.

Another advantage of the camera is it supports Memory Stick media card having capacity of up to 16 GB. The T500 camera also integrates 3.5-inch transflective, touch panel LCD screen for easy navigation and 5x zoom.

The new camera connects to a compatible HD television via an HDMI. Hence photos and videos recorded by the camera can be enjoyed on the TV. Detection of up to eight faces in the frame, auto adjustment of focus, exposure and flash are other key features of the T500.

Talking about the camera, Phil Lubell, director of digital camera marketing at Sony Electronics said, “Our research revealed that people like to shoot video with their point-and-shoot cameras, but were very dissatisfied with the video quality and the resulting large files. Our new T500 fulfills this customer need for a digital camera that delivers high-quality movies in a small form factor.”

The Sony DSC-T500 is bundled with the Picture Motion Browser software for easy organizing and viewing of images. The camera is expected to hit the shelves by next month and will be available for $400.