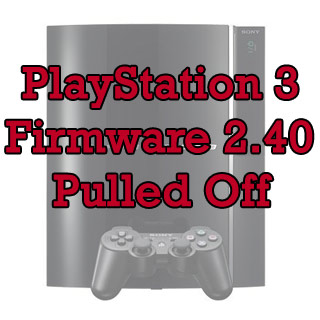 However, the latest news is Sony has pulled the newly released update from its server. While removing the update Sony released a statement which said, “We are aware of a limited number of consumers experiencing an issue with installing firmware 2.40 on PS3, While our consumer services department has seen a low volume of calls on this topic, we are committed to enabling the community and XMB access features delivered in the 2.40 update.”

“In order to further assess the issue, we have temporarily taken the firmware offline for further testing. We are working diligently to isolate the problem for those few consumers and to identify a solution before we put the firmware back up,” SCEA statement read.

The trophy support and XMB in-game access are two key features of the Firmware 2.40 update, which were keenly awaited by gamers. However, gamers will now have to still wait to enjoy these features.