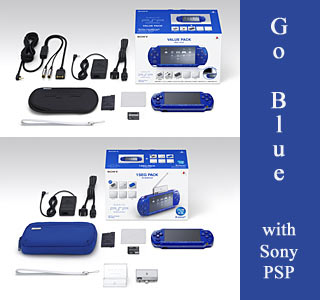 Sony Japan attracts attention and gives a different look to its PSP’s by painting their two latest PlayStation Portables with a dash of Metallic Blue color. The devices are not only colored in blue but also add a dash of color to its accessories as well. The two devices unveiled in blue are Metallic Blue Value Pack and Metallic Blue 1 Seg Pack.

The Sony PSP Metallic Blue includes in its package the PSP device, pouch, hand strap, cloth, a 32 MB Memory Stick Duo, as well as a D Terminal AV Cable which will let you watch your favorite TV shows at home. The system claims to be very user friendly for people who are starting off for the first time with the player.

The Sony PSP Metallic Blue 1 Seg Pack similarly packs in a Metallic Blue PSP with a 1 Seg tuner, a pouch in matching blue shades, the tuner attached, a stand to place the PSP system for TV viewing, strap, cloth and a 1 GB Memory Stick PRO Duo. This device is fit for users who would love to involve themselves with some great quality entertainment.

Sony Japan plans on giving a personalized touch with a variety of options for the PSP users with plans of adding third party titles such as GUNDAM BATTLE UNIVERSE and SUPER ROBOT TAISEN A PORTABLE by NAMCO BANDAI Games Inc., The Legend of Heroes: SORA NO KISEKI by Nihon Falcom Corporation, and PHANTASY STAR PORTABLE by SEGA CORPORATION.

Sony’s Blue wonders are set to make their entry in the market by 17th July 2008 and it will be a limited edition, so grabbing your hands on one of these blue beauties might be a difficult task. The Metallic Blue Value Pack will attach a price tag of 23,800 Yen and the Metallic Blue 1 Seg Pack’s pricing will be 29,800 Yen.