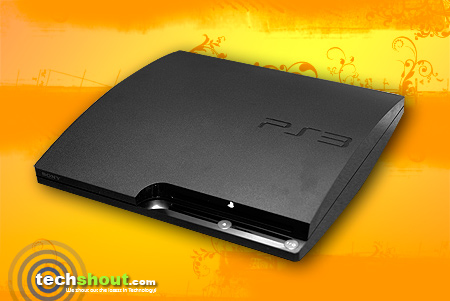 Taking on from where the classic PS3 leaves, the Sony PS3 Slim as it’s familiarly called seems to have kept enthusiastic gamers up on their feet ever since it leaked in May 2009 and it’s right in front of us begging for a review. It is the latest console that seems to essay the slim and trim bout fully. So has it really upped the ante of the Sony PlayStation evolution tree or was it just over-hyped? With the device on our desks for a review, read on to find out whether the device does really manage to keep up to its expectations. Gone are the days when gaming consoles used to be large chunky pieces of electronic equipments. Today they are slimmer and more aesthetic looking while still offering appealing features. Design and form factor don’t seem to hinder the functionality of these gadgets.

This latest manifestation of Sony’s classic PS3 console had us swayed with its first impressions. The sleek fabrication of the console does not really overpower its functionality. Here’s a low down on the features the console packs in. It sports a 2.5” SATA hard drive that offers around 120GB of storage space and that’s quite huge, contradictory to its name. Integrated with Wi-Fi support, the console is internet ready. Accompanied by a DualShock 3 Wireless Controller, it’s bundled with USB and AV cables along with an AC power chord. With an ability to play Blu-ray movies, the high-definition Blu-ray player should satiate the needs of both gaming and movie addicts. You can also look forward to 1080p resolution courtesy the HDMI output on board.

Smaller by nearly a third, this little sibling of the original PS3 seats itself well in any home décor. The Sony PS3 Slim tips the scale at about 3.2kg, a good 1.8kg lighter than its predecessor. Blending well with modern flat-screen monitors, the console also claims to consume about 33 percent less power against the original PS3. If you wish to keep the console vertically up on its feet, then an optional stand that needs to be purchased separately is also on offer.

The next most noticeable attribute about the Sony PS3 Slim other than its obvious thin structure is its matte finish. Yes, glossy is out and matte seems to be the new in-thing. Painted in matte black minus the chrome trimming, we think the console looks pretty refreshing as against its brethren. While we were wondering what made the company replace the silver PS3 logo with the plain and lusterless logo on the top, we were suddenly surprised by the absence of touch-sensitive buttons. Their place has been taken by manual buttons for on/off and disc-eject. Showing off two USB ports in the front, the back includes an HDMI port, AVI multi-out and Ethernet ports.

Moving on to the performance, the device reveals the same interface as the 60GB PS3. Among the most evident changes, the Slim is actually much quieter than its predecessors. Balancing it well with the power consumption, the beast’s 17-blade fan is around 33 percent quieter than earlier consoles from the family. With really no major changes in the home cinema features of the player, for true audiophiles it is endowed with Dolby True HD and DTS-HD Master Audio bitstreaming capability to a receiver over HDMI. Movie buffs are presented with the DVD upscaling ability that renders movies at high definition 1080p. On the media front, the console supports a range of picture, video and music file formats. Just like other PS3 machines in its lineage except the original 60GB model, the PS3 Slim too is not back compatible to PS2 games. 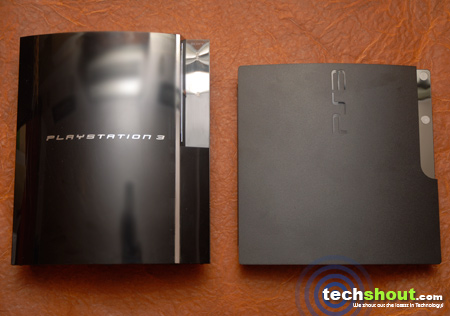 What we really liked about the Sony PS3 Slim console is the obvious, its slim profile. Much unlike the original PS3, the small form factor of the Slim lets it complement any household setting and it can adorn any room without really looking out of place.

The machine is competent enough to stream virtually any media file format from the PC or a USB storage stick. If you love movies, then the high-definition support definitely enhances the movie watching experience.

The console’s large hard drive offers enough storage space to keep you truly entertained. Besides, it can be effortlessly swapped by any drive of your choice.

The much cooler and quieter operation of the console coupled with its low power consumption renders it really efficient particularly for those long gaming sessions.

Though the design of the console is a refreshing change from the boring looks of the original PS3, we think the build appears a little too mediocre.

With no support for the Linux platform or any third party OS, the Blu-ray player also seems to be a little slower than 60GB PS3 Classic.

We think the device is also a bit over-priced. Considering the HDMI cable and stand need to be purchased separately, the overall cost of the device seems to be a tad too much.

Most importantly, the console does not offer PS2 compatibility, a much sought-after feature.

On the whole, we think the Sony PS3 Slim is a powerful console. The robust and definitely sturdy contraption should keep the average gamer more than satisfied with its innovative functionalities. As far as the score card goes, the gaming media machine gets a cool 9 out of 10.