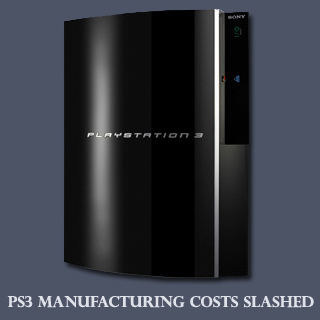 Sony has successfully managed to reduce the cost per machine from the oversized $800 on launch to half the amount now – approx. $400, reported BusinessWeek. This has been possible thanks to some engineering changes along with improved output.

It’s important to note here that this drastic dip in price is applicable to the 40GB PS3 and not the 80GB gaming system, which will obviously cost much more for production.

Furthermore, if Warner Bros. shifts to the Blu-ray format, then the burgeoning sales will drop the prices further.

In a December 27 report, Nikko Citigroup’s Kota Ezawa congratulated Sony’s efforts to minimize the PS3’s chips and tweak its design stating, “We think the biggest factor here is that simplification has become possible through a reduction in the parts count, leading to a reduction in costs.”

It’s yet unclear whether or not the drop in the cost per machine will equal to a price drop for the PS3. Well, what do you think? Will the PS3 be cheaper by 2008-end, and if yes any guesses as to how much would it cost is a price drop becomes a reality and just doesn’t merely remain a dream. Alas!