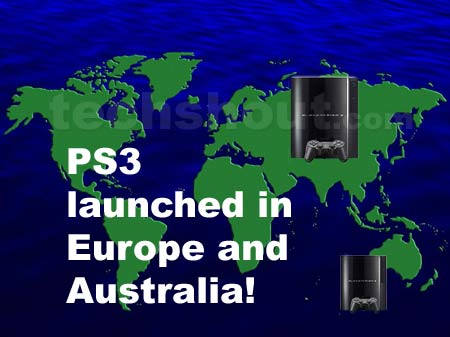 At the stroke of midnight on March 23, the big shiny black box that most gamers would die for, found itself in the hands of many a gamer in Europe and much lower down in Australia. Yes! The Sony PlayStation 3 was launched in Europe and Australia amidst great fanfare.

The European and Australian launch of the PS3 saw just a handful of eager beavers at the midnight launch. You could say that the console did not get as much attention in Europe and Australia as it had got in North America. However, for Sony, who always seems to see the glass as half full, early sales of the PS3 seem to be faster than those of its predecessor the PS2.

However, that’s not to say that in Europe and Australia, when the PS3 launched, it was badly received. In fact, there were gamers who had lined up many hours before the launch. And, they were surely not disappointed!

At the London launch, all those who purchased a PS3 received a free 46-inch SAony Bravia HD television and a free taxi ride home! Totally, Sony gave away £250,000 (approx. Rs.201 Crores) worth of televisions to more than 100 gamers. What’s more, Sony even has a brilliant reason for it. Lucky gamers, we say!

According to Ray Maguire, Head, Sony Computer Entertainment UK, “High definition is very important to people. A lot of people have bought flat panel TVs and they want content to go on it and PlayStation 3 is one of the few places that can get that kind of experience. The TV giveaway in the UK is a reward for gamers’ patience.”

The much anticipated Australian launch of the PS3 involved over 500 retailers opening their doors at the stroke of midnight too. They provided free food and entertainment to the eager gamers who arrived hours before the launch commenced. The popular store Myer in Sydney had erected a large backdrop and screened the James Bond movie, Casino Royal, from 10pm onwards.

Microsoft, Sony’s rival in the console world and otherwise too, was well aware of the PS3 launches in Europe and Australia, it seemed. For, Microsoft actually popped up in a number of places and tried their best to remind consumers that the Xbox 360 console was still a much more viable choice.

Take for instance, in England, at Sony’s Virgin Megastore launch where people were literally invited to camp out, those who were standing up were offered a portable chair to sit on. However, there was a catch as the fold-out chairs had text on them which, when folded out, read “Shouldn’t have kept you waiting”, along with a URL: www.shkyw.org. You probably cannot believe that Microsoft could have stooped so low. Well, if you cannot believe it, then read on.

Microsoft even sent one group of UK journalists around 168 cans of Fosters beer, with a note stating that there are better ways to spend £146, which happens to be the difference in price between the Xbox 360 and the PlayStation 3.

Finally, in France, where the official PlayStation launch took place beside a river, a massive river boat interrupted the grandeur with a phrase on the side of the boat that stated, “Xbox 360 (heart) you”

So, we will have to wait and watch and see how far the war of the consoles finally reaches. By the way, Nintendo, the seemingly content and confident one, obviously has nothing to say.