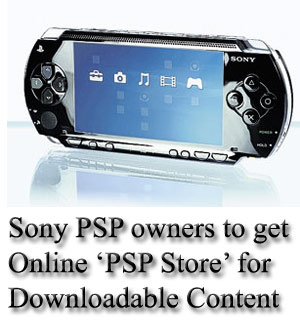 While PlayStation 3 owners are able to access free downloadable content and demos from Sony’s PlayStation Store, Sony PSP users have been left in the dark. But now, things will change as Sony has confirmed that it plans to launch a ‘PSP Store’ that will allow gamers to download a wide variety of content via a wi-fi network.

This bit of good news was announced this week at the Gamers Day event in San Diego by Sony Corporation Entertainment America’s president Jack Tretton, who dropped hints that a portable version of the PlayStation Store would be coming to PSPs very soon.

“I think the advent of a long awaited and quite frankly long overdue ability to deliver a downloadable service for the PSP will help us out a great deal. Hopefully we’ll have it out there by fall,” said Jack Tretton.

The soon-to-be launched online portable store will offer PSP owners playable game demos, trailers and other game enhancing content. However, as of now no particular content to be offered in the PSP Store has been revealed.

Speculation is also rife that Sony may be considering an iTunes-style music store for PSP owners.

It will indeed be great of Sony opened up a music store online so that PSP users can also benefit. Well, one things for sure; all you PSP owners can officially expect the PSP Store to be launched soon. Stay tuned.