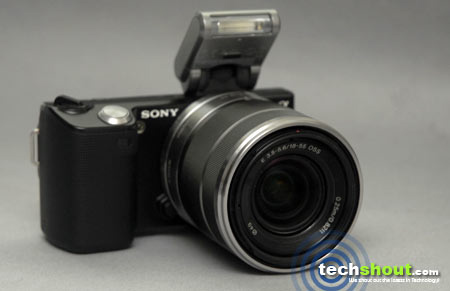 Cameras may not sound like the most wondrous inventions in this day and age. But think of the portrait painter who suddenly found himself struggling to make a living thanks to this magical device which could render an entire picture with a single long click. While Google may yet pull a Great Automatic Grammatizator out of its hat, there’s only so much creativity with which technology and gadgets can be augmented. It’s probably that unconscious feeling which lets regular folks feel like accomplished professionals while holding something like the NEX-5 in their hands or employing Photoshop to meddle around with the final shots. When the Sony NEX-5 interchangeable lens camera perched itself upon our review desk, we were only too eager to see if the device was indeed capable of serving as an upgrade for those moving from standard digital cameras to DSLR-types.

The Sony NEX-5 was shipped to us with a USB cable, BC-VW1 battery charger, 1080mAh NP-FW50 Li-ion rechargeable battery, HVL-F7S detachable flash, the E 18-55mm F3.5-5.6 standard zoom lens and a whole trail of the usual inevitable booklets that accompany electronics. While the camera looks nothing like a Fiddler crab, our thoughts rushed to this marine critter upon first glance of the chassis with the lens attached to it. This probably had to do with the attractively thin main chassis which appeared to be struggling awkwardly under the bulk of the lens. Sporting a much neater look than a traditional DSLR, this Sony offering is certainly a pretty piece of equipment. If you compare it to the NEX-3, its construct is even smaller than the Little Big Shot’s. But what really takes the cake in terms of design is the lens mount which sticks out of the body a little. The whole effect just takes Sony’s entire efforts at chipping away the size into sharp perspective. 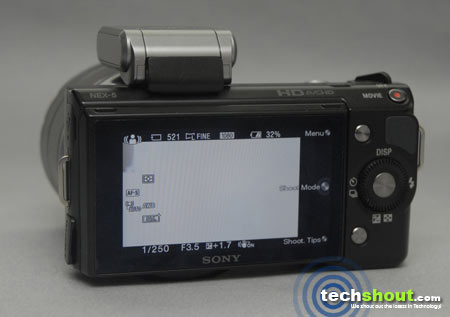 Along the top are dedicated buttons for video recording and playback of content, an on/off mechanism, the trigger button, the microphone and an accessory port. The last mentioned can hold the flash or a stereo microphone. On the left side sit the USB and mini HDMI port, while the base is dotted with the battery/card compartment door and tripod mount. The scarce controls perched besides its display involve a dial and a silver button each above as well as below it. With the protruding battery compartment and thumb rest, a two-handed grip is what the camera’s built to promote. Turn the NEX around and it’s easy to fall in love with the 3” TFT TruBlack LCD as soon as you see it, and even more so if you view it in bright sunlight like we did. It’s clearly viewable in most lighting conditions and we don’t think anyone other than the ardent photographer will actually hate the fact that this screen stands in for the EVF. We genuinely appreciated the convenience of it being adjustable at 80 to 45 degree angles while capturing overhead and waist level shots.

But Sony’s crafted the NEX-5 for normal people, haven’t they? It’s easy to root for the idea of on-screen help guides for the bedazzled user until you actually get down to using the camera. Since a lot of point-and-shoots including something like a basic Kodak model offer all the fireworks amateur photographers would look for in a camera, this camera should be nothing but user-friendly. If only we could say it’s true. Our first hands-on with the NEX cameras during Sony’s press launch event did slap us in the face with a premonition which rang faithful as we put the Sony NEX-5 through this review. The functions rendered by the physical controls take a lot of time getting used to and they can feel quite mysterious, if not intimidating, to a first-time user. Taking after the habit of your car keys, features like the ISO setting or Format menu function seem to stay hidden under redundant button presses with the sole idea of frustrating you. Then there’s the fact that’s you’ll keep driving into notifications of certain functions being disabled while playing with the settings without the slightest idea of where you took a wrong turn. 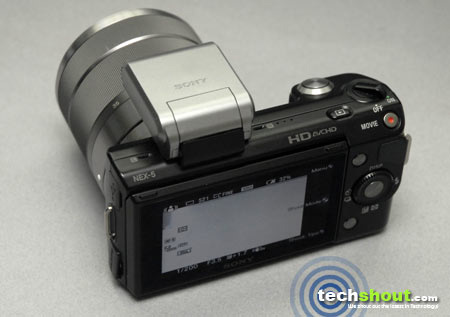 Since Sony touts the NEX-5 camera as one in sympathy of the masses migrating from standard digital cameras to those of the DSLR-like ilk, we decided to take them up on some of the mainstream highlighted features. While more megapixels may be considered better performers by people who are impressed by numbers too easily, we’ve seen 12MP snappers treat images far worse than 8MP counterparts when set to intelligent auto mode. Thankfully, Sony’s 14.2 megapixel offering with its Exmor APS HD CMOS sensor does not disappoint. It clicks beautiful photographs in Standard or Fine JPEG, JPEG and RAW or just RAW formats. The whole range of effects which normally escort similar offerings such as scene, iAuto, anti motion blur, Sweep Panorama and its 3D flavor, manual exposure and more support the process. And experimental folks who like to tinker around with depth of field, aperture, metering modes, exposure compensation and others can knock themselves silly with this gizmo.

Among all the marketing gimmicks manufacturers seem to port around in their bag of tricks, an unbelievably high ISO level normally crops up more than others. The Sony NEX-5 can deliver ISO ranges of 200 to 12800 along with Auto. We’re pegging the optimal ISO prowess of this gizmo at 3200. Take it any higher and the image noise begs hard to be overlooked. The NEX-5 captures decent MP4 videos and even more stunning full HD 1,920 x 1,080/60i AVCHD content, although the controls within these modes are sadly limited to changing the exposure compensation and manual zoom. And manual zoom makes for extremely shaky videos if you need to move in and out of the frames more than once. MP4 content can be shot in VGA or 1,440 x 1,080 resolutions. As for the battery life, it should get you through two to three days of average usage or one day of trigger-happy fun. 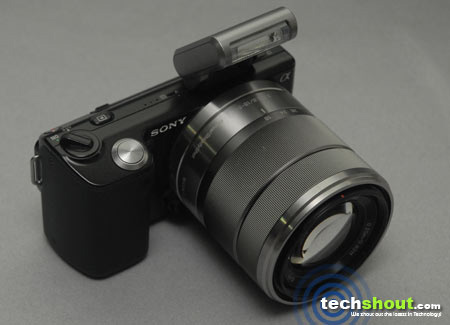 The idea of interchangeable lenses empowering such a diminutive device is very endearing. The Sony NEX-5 paints an attractive impression of what we can expect from Sony with regards to design and functionality in the future.

The camera captures alluring shots while supported by an enviable number of adjustable modes and functions. Once you figure out how to use them, the photographer inside you will be pleading to be set loose.

Its tiltable LCD is really very convenient for snapping up all kinds of photos from various positions and in any kind of lighting condition.

The controls and menu are not as user-friendly as Sony may have wanted it to be. It’s tough not to lose your way or forget what you were searching for while halfway to the various functions.

It can be a bit like that colleague who got dropped on his head when he was just a baby. The words we’re looking for here is slow response when least expected.

Sony’s stuck their NEX-5 with a puzzling Rs. 34,990 tag. It’s just Rs. 5,000 costlier than the NEX-3 and anyone willing to pay that much for a higher end camera may not mind forking out the extra cash for a quality upgrade from 720p to full HD videos. It’s not a bad price for something which seems to be still evolving from a product which straddles a fuzzily defined consumer segment. The device offers a lot of flexibility for moderately serious photographers to regular folks in the market for an advanced camera. We liked the Sony NEX-5 well enough to give it an 8.9 out of 10 rating.