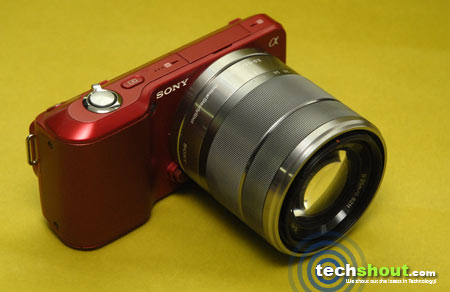 Panasonic’s been quite a forerunner as far as the entire hullabaloo surrounding compact cameras offering DSLR-like image quality is concerned with the first in this space picking the light of day around 2008. Between then and now, we’ve seen a host of innovations that hit this terrain with as much enthusiasm as that of a teenager falling in love for the first time. Sony for one appeared to take a more matured approach. The company waited for everyone to jump in and out until they figured just the features that would fit a compact camera plus lens combination with ease. We still have a picture of Sony pushing the Alpha-series NEX-3 and NEX-5 cameras at a press conference in December 2010 with quite the same gusto. We’ve deciphered the Sony NEX-3, particularly in this review.

No really, at some point or the other there is going to be someone bugging you like we were, by non-camera friendly colleagues – ‘What’s the big deal about compact cameras with all the knick and knacks?’ You’re answer is going to be more of textbook-like with only a straight face to save it – ‘A camera that offers DSLR-like image quality minus all the bulk’. Thankfully, we had the NEX-3 lugged on to us this time to prove our point. When we slipped the camera out of the box, it managed to garner a fair share of ‘wows’ from everyone around. All the accompaniments we would need to have the camera up and running were in the box too. Right from the much talked about 18-55mm interchangeable lens to the battery charger, an attachable flash light, the USB cord and neck strap – it was all there! 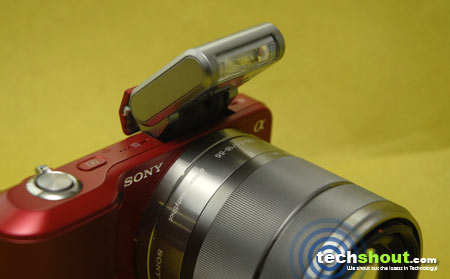 The Sony NEX-3 we received was dressed in a dapper shade of red which was only bound by duty to grab attention. The camera is lightweight and bears a simplistic yet bold cut which we thought was just on the fence of being an eye-sore. Among its competitors, the camera is known to feature quite a low weight fabrication courtesy of the plastic treatment it gets. The device pushes the weighing scale to around 297g along with the battery and the card. The addition of the lens makes it heavier by only 211gms. So it’s just above ½ kg of camera worth that you’re going to be lugging around with you. The shutter button is combined with the on/off power ring affixed on the top rim. We’ve almost always seen ourselves reaching out for the Gallery button in the area next to a camera’s LCD screen. Sony changes it with this one that has the function sitting alongside the power button. The L and R stereo microphone outlets with the speaker are also here. Right in between this locale is the USB port that’s secured by what felt like a rubberized door.

The LCD Viewfinder is approximately 3” in size and has an array of navigation buttons on its right including a circular 5-way pad cum jog dial and two navigation buttons above and below it. There’s also a committed movie mode button here. The dotted matte finishing on the lens side defines better grip when the camera is held in the right hand. On the LCD side, there’s a thumb rest too that complements this grip. The grip area could have been denser and the grip angles offered presently felt like it’s a rushed job. But that was only until we hadn’t attached the strap to the camera lugs on either side. Once we did, much of our grouses about comfort and convenience were put to rest. The underbelly reveals a Lock/Open flap for the battery and HG, SD slot. 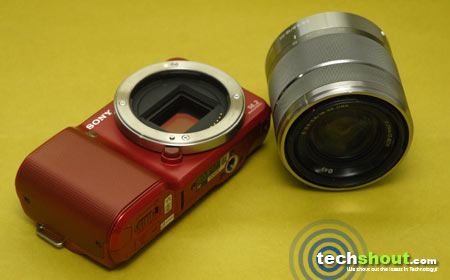 So far so good and it was time to put all the fixtures in place. Getting the flash hooked to the Sony NEX-3 is a task with the small space assigned to this being more of a pain in the fingers than anything else. Appreciatively, attaching the lens was a smoother operation. The LCD tilt ability saw the display flex up to 80 degrees upwards and 45 degrees downwards for easy usability at various angle compositions. Its 921,000-dot resolution is complemented by the company’s Clear Photo LCD Plus and Tru Black technology. The screen’s brightness could be adjusted between Auto, Manual and Sunny Weather options. The company has done well with the Control wheel which was our personal favorite on this device. It’s well tailored and the high limb along the perimeter with the distinct cuts ensures you choose desired functions with utmost ease. It is precisely the sharp cuts on the wheel though that could wear down your thumb if you use it too frequently.

As far as the included lens is concerned, it’s a notch above many of its counterparts in terms of quality. Bearing a metal finish, it uses Sony’s SteadyShot technology and works at offering just the kind of image stabilization you could be looking for. The company sketches out a rather simple user interface too that’s seamless and user-friendly. What we liked initially only got plain tiresome after a certain point – running onto to the jog dial for each and every option was not something we’d fancied. A dedicated mode selection dial for the same would have been highly appreciated. The company is generous enough to detail out selections with onscreen text however. When you do dive into the main menu, it’s sliced up into the shoot mode, camera, image size, brightness/color, playback and setup options. The menu which can get a bit befuddling responds very quickly nevertheless. 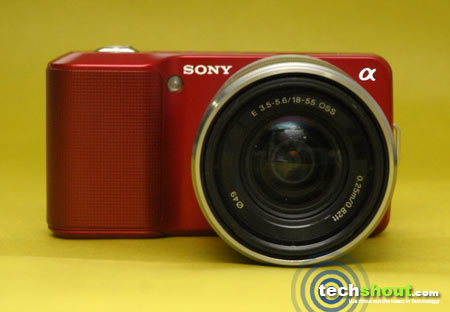 Sony includes a range of functions in the NEX-3 that should let you capture the moment perfectly. An Intelligent Auto mode is accompanied by the Program, Shutter Priority, Manual, Aperture Priority and 3D Sweep Panorama options along with Sweep Panorama. The HD enabled camera interestingly lets you snap up a 180 degree panorama at one go and we loved how the camera goes retro with its ‘click’, ‘click’, ‘click’ sound in this mode. We were quite taken aback by the superior image quality even the panned mode had to offer and add to it the fact that switching between the various modes was effortless too. A 4GB SD card came along with this Sony wonder and the camera supports still images in JPG and RAW format. Performance – Yes! Sony has definitely worked to nip competition in the bud. Whether we were shooting portraits or low light images, the included 14.2-megapixel Exmor APS HD CMOS sensor left us rather pleased by its quick adjustment to various settings.

The lens with its 4x optical zoom coughs up a decent enough focusing speed with a plain half-press of the shutter helping shower attention on the subject efficiently. Images are detailed and the colors emerge naturally whether you are going to view them on your computing device or have them printed. When shooting videos in the 720p, you can use the manual zoom to enhance what you’re recording. The Sony NEX-3 camera manages to handle zoom all by itself in this mode and that too pretty well with the video capture results too being nifty. 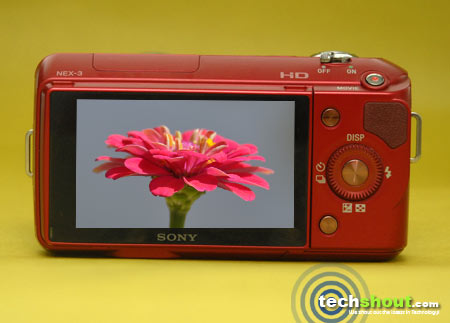 Even with the huge sensor fitted on, the camera isn’t very bulky.

The camera packs in a detailed shooting guide complete with text icons in the menu.

The mechanical zoom and focus rings are a nice inclusion.

It will take you much before you manage to grasp all of the camera’s features. Many functions are not in the exact place you’re going to assume them to be. There’s also no option to watch images and videos together.

Considering the LCD is tiltable, we would have liked a sideways or full rotation.

The battery life of this camera is pretty much of a downer and with flash on, it only gets worse.

While the camera does manage to touch the near DSLR image quality, it still didn’t really reach there. The assurance of a mirrorless digital camera leaving aside the heap though is more than enticing. If you can look past the slight noise in images and the poor battery life, the Sony NEX-3 with all its interchangeable lens niceties sounds like a good option. That’s only if you’re willing to shell out a good Rs. 29,990 for it. We peg the camera at a respectable 8.5 out of 10.