Sony Xperia Z3 Tablet Compact isn’t the catchiest of names to give a device, but that’s more or less what the Japanese OEM plans to call its upcoming slate. And as you’d have guessed by now, the Z3 tablet will fall in the flagship series and stand in as a mini version of the Xperia Z2 Tablet.

The Sony Xperia Z3 Tablet Compact is most likely the very same SGP621 slate which was leaked a couple of weeks ago carrying LTE support. The device’s existence was revealed by a user manual for the BSC10 accessory which was spotted by TechTastic on the company’s website. 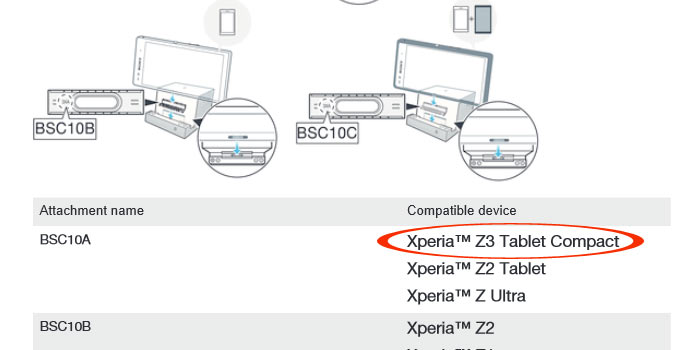 Apart from the name and 4G LTE support from the previous leaks, there’s no other concrete information on the tablet. Nevertheless, the moniker does hint at what we can expect from the device. Firstly, the slate will be smaller than 10.1 inches and we’re probably looking at somewhere between 8- and 9-inch designs considering that the 7-inch market is already overcrowded and Sony isn’t likely to take on the risk.

Also see: Sony working on a 6.1-inch KitKat based device for budget markets

And since the Sony Xperia tablet falls in the flagship series, a water- and dust-resistant design is a no-brainer. Unlike other OEMs, Sony has taken a different approach to the ‘mini’ trend by offering a no-compromise experience. You can expect Sony Xperia Z3 Tablet Compact to get the same treatment and offer specs similar to what its larger sibling packs.

With the Sony Xperia Z3 Tablet Compact included, we expect to see a total of 6 devices go official at the company’s September 3 event in Berlin.