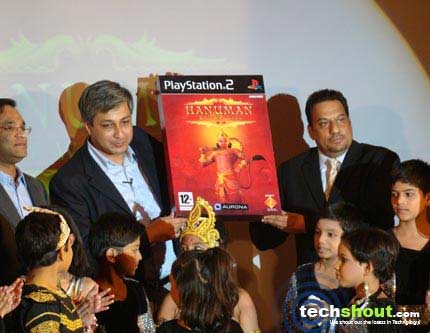 Sony Computer Entertainment Europe, for the first time in the Indian gaming history, launched a game completely conceptualized and developed by an Indian developer on March 25, 2009. Hanuman – Boy Warrior, also the first game based on Indian mythology, developed by Aurona Technologies Limited.

Yes, there are a lot of “firsts” about Hanuman- Boy Warrior, one of which is also that it is the first game for the PS2 that is playable in Hindi and as well as English! Launched exclusively the Sony PlayStation 2 in a plush event at Mumbai, India the game was unveiled by Atindriya Bose, Country Manager, PlayStation Sony Computer Entertainment and Dr. Santosh Pillai, CEO of Aurona Technologies Limited.

“We are very proud to launch the first Indian game on PS2 with localized content, completely developed in India. Hanuman is our very own classic hero and is ever-popular across India & with Indians abroad. The launch of Hanuman: Boy Warrior has marked a very significant milestone in the Indian game development industry and also signifies the importance we attach to the Indian market and the Indian Game development industry,” said Atindriya Bose.

“We have created the console game Hanuman: Boy Warrior to capture the hearts and minds of India’s current and aspiring game players and their families. Immersive game play is at the heart of this fascinating game. Using the PS2™ console, the player helps the hero to fight evil-doers at several mystical landscapes of the epic period. We believe the game has the necessary ingredients to become a classic,” said Dr. Pillai. 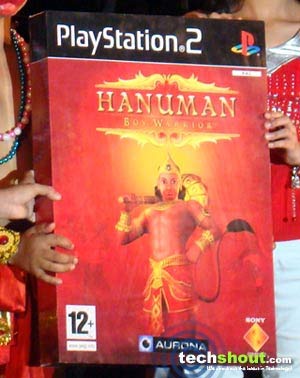 The game is all about the journey and adventures of Hanuman across his childhood and young adulthood, i.e. from being Bal Hanuman to Yuva Hanuman. It entails his fight against many an enemies on the way for which he uses his powers to triumph over the evil spirits and gain more life power. It involves the classic “Win of Good over Evil” tale aimed at children and young teens. The villainous characters in the games are – Thakshaka, Shirkasur, Bhramarakshasa and Mayurasa.

However, instead of being the typical destruction and violence based games, Hanuman – Boy Warrior has been made to subtly impart the values of respect, love and the power of good, to the players as Hanuman, in the game, frees the soul of the enemy possessed by evil and bad karma and does not kill or destroy the enemy.

Hanuman- Boy Warrior has been priced at Rs. 499 for the Indian market.