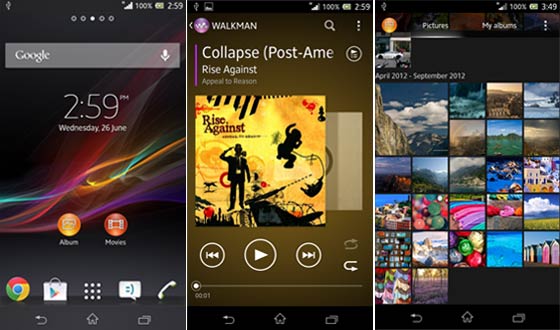 The Sony Honami might just turn out to be a much bigger beast than we had expected. Leaked system dump from this device has made its way out in the open, and it has brought forth some surprising attributes that might form part of the offering. Apart from the ability to capture 4K videos, this Sony phone will apparently include a 20MP camera, a Snapdragon 800 chipset and a host of other advanced traits, apart from a new and improved user interface.

Spotted on the XDA Developers forum by the unofficial Xperia blog, the leaked details have come out through a Canadian carrier device bearing the model number C6906. There’s no guarantee that the number in question applies to the Sony Honami, but the nomenclature indeed points out that it’s from the same series. Anyway, the system dump has been scrutinized and details are finally out.

The strings from the build.prop of this device have thrown some light on its hardware. Supposedly a Snapdragon 800 chipset which we’ve seen on the recently unveiled Xperia Z Ultra will be making its way into this phone as well. Moreover, it is being said that the Sony Honami will be capable of capturing 20MP photographs (5248 x 3936) using a new Super Resolution algorithm set.

Another shocking aspect is its supposed capability of recording videos at 4K (4000 x 2000) with an aspect ratio of 2:1. Moreover, users will purportedly be able to push the ISO settings of this camera up to 12800. A Timeshift burst feature and a SteadyShot mode have also come to the fore along with other details. But that’s not all; it seems the company has apparently created a camera API which enables new functions to be added onto the camera app called ‘Xperia camera add-ons.’

There’s even a fresh Augmented Reality app that the Sony Honami supposedly kicks in, along with a utility based on Nokia’s HERE City Lens app. Furthermore, integration of the Walkman feature with Music Unlimited could finally be a reality with this device. A new user interface will be granting the phone a refreshed launcher as well as numerous new basic apps.

The Honami still remains a mystery, and since the company has already unveiled the Xperia Z Ultra recently, we can expect the launch of this smartphone to have been slated far away from now.