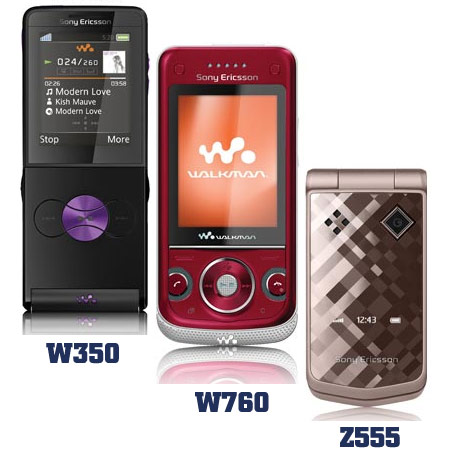 Sony Ericsson has introduced three new mobile phones called Z555, W350 and W760, which will be displayed at CES 2008.

To begin with, the Z555 is a chic looking clamshell device, which sports an exciting new diamond design. It does well in the feature terrain too. It incorporates Gesture Control which increases the use of the built-in camera to the maximum, enabling the task of ignoring a call or snoozing an alarm. The other significant features of the Sony Ericsson Z555 mobile phone are:

And finally the slider W760 Walkman series phone, which is the first-ever Walkman phone with Tri-band HSDPA and Quad-band EDGE, includes the below mentioned features:

Pricing and availability details for none of the new Sony Ericsson mobile phones has been revealed till now.