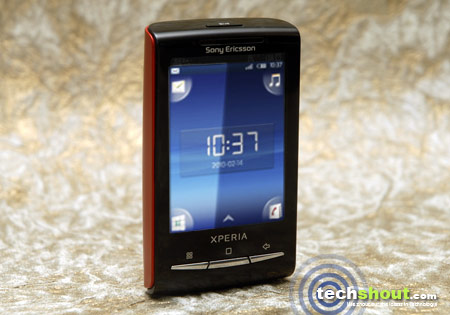 There’s hardly a phone manufacturer that hasn’t taken a fancy to the ‘Green bot’. While some like HTC and LG jumped soon enough, others like Motorola and Sony Ericsson were rather slow in joining the Android bandwagon. Speaking of Sony Ericsson in particular when it did eventually everyone took notice. What was released as the company’s first Android phone, the Xperia X10 showed off some interesting features. As much as for the innovations packed onto it, the phone sadly garnered attention for its lagging interface too. February 2010 saw the company releasing a scaled down version of the phone which though stripped in size suggested to have made up for the older brother’s misdoings. Claiming to be the smallest Android phone yet, we received the Sony Ericsson Xperia X10 Mini for a review over the weekend.

A sibling to the Xperia X10, the E10i Mini was sent in a dapper bundle that packed in an FCC statement, the user guide, earphones and replaceable covers. The phone we received was an all black handset with the rear side having a matte finishing. There were also glossy red, shiny aluminum and pearl white back cases. We personally loved the black chassis thanks to its non-glossy appearance though all of them are commonly plastic featuring the Sony Ericsson logo and the words Xperia inscribed at the bottom. It doesn’t take an expert to notice that the phone packed in is sincerely diminutive in size. A mere 88gms in weight, it sizes up to 83 x 50 x 16 mm only. It’s without doubt light and very easy on the eyes in a very cutesy form factor resembling more a fancy matchbox or lighter than a phone. The ultra-small form factor makes it sit comfortably in the palm and doesn’t slip off easily too. 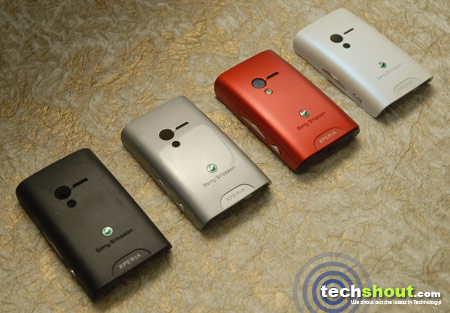 The company has worked hard at trying to fit everything into the compact interiors of this handset with the battery integrated right into the hardware of the phone and of the irreplaceable type. Only the SIM card slot and micro SD slot are visible. The front face of the phone holds the 2.6” display below which are the Menu, Home and Back keys. The top edge of the phone holds just the Power key/Screen lock. The lower side is lined with the USB cum charging port covered by a rubber flap and a 3.5mm port while the volume and camera keys are seated along the right perimeter. All keys on the phone except the Power (it’s finished in plastic) get a metallic treatment. Powering the phone put us straight into the Setup guide for basic phone settings. It included importing contacts from the SIM, Date and Time settings which are done automatically through the Internet, Google account set up and Email account settings. The Sony Ericsson Xperia X10 Mini handset is based on the Android 1.6 OS which has been customized well to suit the small screen estate. While doing away with the conventional Android Home screen, the phone features a scrolling list of widgets that requires just a simple flick of the finger to be seen.

You can choose to implant it with 10 widgets in the central area though only one can be added to each screen. The interface has an interesting four-corner shortcut option to include quick launch icons. There was also a bottom arrow button which when moved revealed a plethora of installed applications arranged in a 3 x 3 matrix. The Menu button allows you to change the wallpaper, arrange widgets or arrange the icons. The applications can be spread over five conveniently navigable pages with smart use of the tiny screen and neatly organized widgets and applications. In contacts, we noticed two semi-circular buttons along the edges in the scroll list which allows zooming out three consecutive alphabetic order names. What’s also different here is the Sony Ericsson Infinite button that syncs contacts with online accounts using Timescape. While it may seem like too much of a clutter to some users, we think it’s a nice way to stay socially connected. 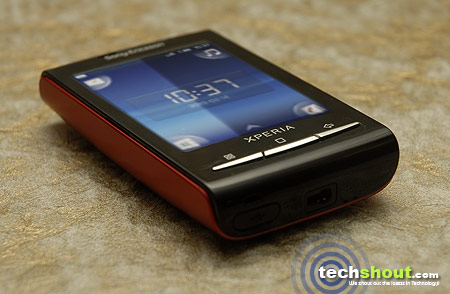 The 600MHz processor spells simplified navigation all the way. If you think Sony Ericsson has found a middle ground with performance courtesy of the phone’s tiny appearance, think again. The Sony Ericsson Xperia X10 Mini can claim to be one of the smoothest operators we’ve met in recent times barring the slightly slow start-up. Once we were accustomed to the touch on the phone, it behaved just like we wanted it too. The company stays far from a QWERTY keypad however and has incorporated a virtual T9 keypad with 2 input methods namely Multi Tap and Quick Text. The latter remembers spellings and also gives word suggestions while messages are generally saved in threads. We were quite impressed with the web browsing experience on this phone. The browser is the traditional Android WebKit version with the status of loading pages shown in an upper blue area which looks good only if pages are saddled fast. The Xperia X10 Mini is quick at accessing content over the Internet and coupled with the onscreen zoom in/out tool only adds to the fun. A magnify tool lets you select just a particular section and takes you exactly where you wish to go, lending a helping hand when viewing websites with very fine text. When you zoom in/out of text it doesn’t waste too much time and optimizes to fit the screen correspondingly.

The menu button here holds the new web address, tab management, add bookmarks, reload page, add to main menu, send link and Downloads options. What should bother a few though is the fact that the browser has left out multi-touch support. Nevertheless we loved how quick the phone was to switch from portrait to landscape modes and vice versa. On YouTube, the videos took time to load initially though no lags were observed once they were up and running. The screen isn’t the best in terms of video resolution but you can’t ignore the loud and clear audio quality. The phone’s own audio player is simple and neatly organized. The Infinite button is the only improvement in the player and when you hit the knob it scans the artist data of the song being played to ping up an array of content on the web counting on YouTube. The Sony Ericsson Xperia X10 Mini only seems to work with H.264/MP4 or WMV formats for videos with very restricted options for playback. There’s FM radio too for the audiophile’s pleasure with the supplied earphones proffering great sound. 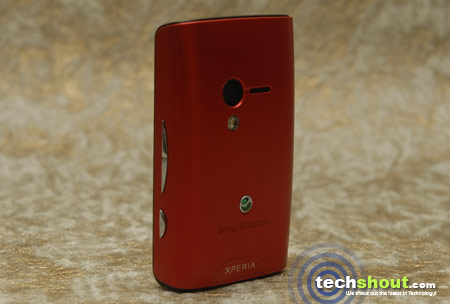 A 5MP camera complete with LED flash should keep those odd photo capturing cravings in check. The intuitive camera interface shows off a flash on/off shortcut, a still/video toggle, a link to the gallery and the camera scene attributes above the viewfinder image. You can preview images immediately after capture with the option to delete, share or set as wallpaper/contact image. There’s nothing really different in terms of image quality with the handset delivering a maximum resolution of 2592 x 1944 with images. Videos can be recorded in 640 x 480 resolution as 3GP files and are just about average. Including a microSD card of up to 2GB which can be expanded up to 16GB, the phone’s internal memory is around 171MB. We appreciate the inclusion of the complete version of Peggle which puts the touch to quite some test while the trial version of the Edge game too was fun. The phone supports one-touch zoom which works really well for images. Multimedia enthusiasts can watch out for committed Facebook, Twitter, YouTube, Google Talk, TrackID system WisePilot and NeoReader applications to keep them busy. An older version of Google Maps also finds place here.

Intuitive and seamless interface with no visible lags.

We do understand that fitting a QWERTY keypad isn’t really logical on such a small screen but still something better would have worked wonders.

Battery saps out too soon, just 1 day on heavy usage with Wi-Fi on to be precise.

While ‘Donut’s are lip-smacking, ‘Froyo’ would have been much more delectable we think.

Sony Ericsson knows very well what it was entering into by building such a tiny phone. There’s nothing really worth complaining about the phone considering it’s more than your average performer. It makes a point despite its very small form and should hit the target audience just right. We mark the Sony Ericsson Xperia X10 Mini at a good 9.3 out of 10 for having impressed us as much as it did.