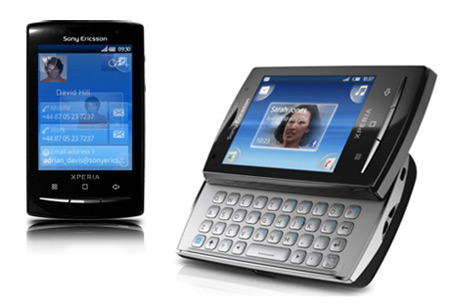 Nokia does seem to be rather stubborn with its reservations of having the Android system lugged on to its devices. While the company’s recent partnership with Microsoft only essays the thought further, it’s the other manufacturers that can claim to be truly having a party. There are phones of all shapes and sizes that have scurried into the market based on Google’s committed platform for mobile devices. It’s not often though that a phone manages to have our eyes glued to it for reasons solely centered upon its design. Sony Ericsson’s Xperia X10 Mini handset which we reviewed awhile back showed us how ‘good things come in small packages’. Its most recent sibling, the Xperia X10 Mini Pro packages all the nifty features the earlier edition of the handset was known for albeit with an added slide-out keypad. It also appears to have grown taller since its last outing. We’ve jotted down just what the newest version of the Mini holds in this all-inclusive review.

A sky-blue white combination of the box that toted in this cutesy phone had us more than intrigued to rip it open instantly. Unlike the Mini that we reviewed earlier, there were no interchangeable back covers for company. Our review unit was dressed in a plain shade of black and had a pair of earphones and charger bundled along. The frontal glossy area of this dainty phone has the words Sony Ericsson etched atop the screen with ‘Xperia’ written above the trio of buttons. It’s the Menu, Home and Back knobs given a metallic treatment that sit pretty below the screen. The right edge is doused with dedicated camera and volume adjustment switches while the left is outlined by a plain USB cum charging port. On the top panel is the Power On/Off button which shares functionality with the Lock attribute.

On the flipside, the Sony Ericsson Xperia X10 Mini Pro features an LED flashlight with the camera lens and the Sony Ericsson logo. There’s also a speaker grille in the lower area. Getting the back cover off is a task in itself and once you’re in this terrain, you’ll notice the company has thrown in a replaceable battery unlike the earlier version where it came integrated. A slide out QWERTY keypad has been affixed sideways to help the handset maintain its demeanor. The phone took a bit too long to actually start up when we powered it on. The 2.5” capacitive touchscreen nevertheless lit up vividly. Offering a resolution of 240 x 320 pixels, the display handles touch pretty well. The low resolution does however mean you won’t really be able to enjoy all applications up front from the Android Market. With the familiar four corner shortcuts on the homescreen, it’s Android 2.1 that runs the show on this phone. You can customize the shortcuts to embed your favorite applications here. A maximum of four homescreens can be personalized ‘as you like it’ though the diminutive screen restricts you from having more than one widget seated on the screen. On the upside, the widgets require no more than a gentle nudge should you desire to have them arranged in a preferred order. 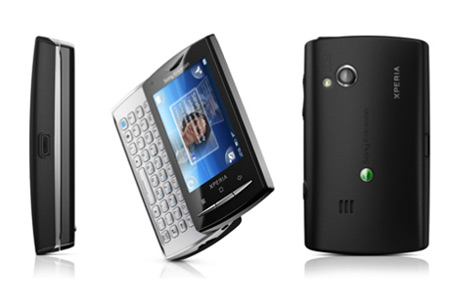 In the menu interface, the included functions follow a 3 x 3 matrix arrangement. The menu can be extended to as many pages as you like and we stopped at nine for obvious reasons. The drag down notifications area and pull-up menu stay put right through. While there’s nothing worth complaining about as far as the Mini Pro’s interface is concerned, it sure didn’t seem like being caressed too often. Every time we were ‘tempted to touch’ it too much, the phone froze with only its restart coming to the rescue. If you slide out the keyboard, the Pro is literally a ‘pro’ at changing to the landscape mode in a jiffy even if you have the handset held straight up. Though the keys are well-spaced, their build makes them quite uncomfortable and you’ll find yourself reaching out for the touch more frequently.

The music player brings in very typical music controls and you can browse by tracks or in the alphabetic order. The top right corner also has a shortcut to the now playing songs. The Infinity button in this interface is what really makes the player different from those found on other phones. Hitting the button will offer additional information about the track along with associated YouTube content on the PlayNow store. Speaking of PlayNow, access to the store is instant and it is pretty varied in terms of the content that it has on offer though the attached price does appear ridiculously high. The audio quality of the phone is about midway between being good and ok, nothing to really write home about.

The implanted 5MP camera tags along a rather simplistic and basic interface. It impressed us from the word go by remembering our previous settings. So if you left at video when you last triggered the snapper, it’ll have you right back in the same settings. When shooting videos, there are no more settings than switching between the two modes. Videos are captured at a resolution of 640 x 480 and definitely aren’t game to compete with the attributes we see in most Android phones today. There’s no HD support too. Nevertheless, the video quality is good for those odd moments you’d want to capture when you’ve forgotten your digital camera. There’s an onscreen bulb which indicates being able to switch on the rear-side LED light. In the still mode there are a few more options on offer like flash and choosing from four scene modes. Vertical scrolling of the finger helps zooming in and out of pictures. You can’t pinch to zoom on the phone and it seems to make practical sense given the tiny screen size.

The Sony Ericsson Xperia X10 Mini Pro supports up to 16GB of memory via its microSD slot and should suffice virtually all your data hoarding needs. Sony Ericsson has obviously been riding high as far as the TimeScape feature on its Android phones is concerned and this phone is no different. It’s social networking at its best though we did happen to face that odd lag in between particular when it updated streams. The Peggle game kept us occupied for more than we’d anticipated it too and is pretty accurate with the touch. Besides the game, there are a couple of entrusted Google Map services for road navigation too. With Wi-Fi on, the phone barely managed to touch the 24 hour mark in terms of usage which could be disappointing to the ‘switched-on’ user.

The phone boasts of a small yet practical form factor.

It’s quite filled to the gills on the feature front with the four homescreen shortcut standing out among other things.

Despite the ‘mini’ size, the phone is quite bulky.

The integrated Web browser doesn’t seem all that capable. There’s no flash support and the zoom abilities too, appear obtuse.

Sony Ericsson could have done better with the imaging skills on this Mini phone or even more functionality for business users for that matter. But the company didn’t promise any of this at the outset and kept the Mini Pro at doing what it could do best – messaging. A very functional keypad to up the ante of the otherwise chubby X10 Mini should go down pretty well among mobile enthusiasts who love texting. Its ultra-tiny profile too makes it all that more amiable. The phone presently sells for approximately Rs. 14,900. Our rating meter for the Sony Ericsson Xperia X10 Mini Pro reaches 8.7 on a scale of 10.