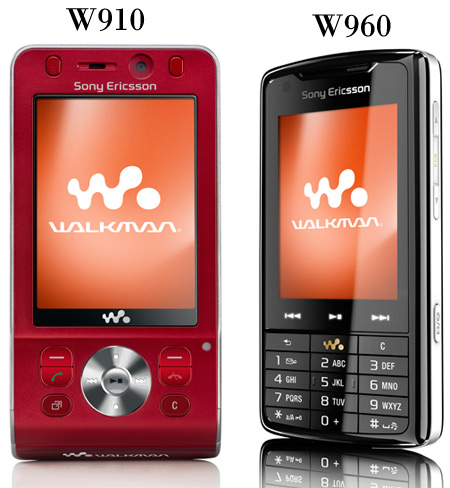 When Sony Ericsson launches mobile phones, they go all out and surprise consumers with not just one but at least four new phones every time. SE has launched two new Walkman phones- the W910 and the W960. Also launched, are the K850 Cyber-shot and Z320 handsets.

The Sony Ericsson W910 is an HSDPA Walkman phone that delivers a great entertainment experience, whether its music, 3D games, videos, or Web access. This handset has room for over 900 songs on the 1GB Memory Stick Micro that comes bundled with the phone.

The newest Walkman phone offers quite a number of great features including the pretty amazing ‘Shake control’ one, which allows users to shake the W910 back and forth to shuffle the music playlist. And, if you are into gaming and are growing tired of those dedicated buttons, then you can use this feature to steer the phone from left to right to make your game moves.

Besides, the Sony W910 Walkman phone features the PlayNow 4.0 mobile download service, giving the user instant access to an extensive catalogue of games, mastertones and music (including music from Sony BMG).

Then, there’s a feature called SensMe, which offers users a totally new way of browsing through music on the W910 Walkman phone. Using SensMe, you can create playlists based on tempo and style rather than artist and album.

The Sony Ericsson W910 phone also offers a great way to manage music, video and podcast files on the phone, using the new Media Manager PC programme, which is also used when transferring files to the phone via USB.

Coming to the second Walkman phone; the slim Sony Ericsson W960 phone, which has a capacity for around 8000 songs (8GB). This phone has a wide 2.6-inch display and a 3.2 mega pixel camera. Also, something great about this W960 Walkman phone is that you can either use the touch of your screen or a stylus to navigate.

The W960 Walkman phone sports a 3.2 mega pixel camera with Auto focus feature. Using the Media Manager PRO PC programme, you can sort out all content and optimize music, photos and videos for use on the W960 phone.

The handy TrackID music recognition software allows user to record a clip of a song on the phone and instantly find out the name, artist and album.