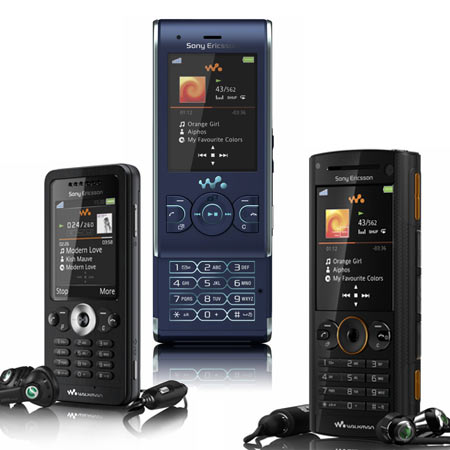 The Sony Ericsson W302 features a 2 megapixel camera with 2.5x zoom. It also sports man entertainment features including 3D games, Java and Video viewing. W302 also comes with Bluetooth connectivity, USB support and Memory Stick Micro. The handset further has 20MB of internal memory and 2-inch of display. The phone is expected to be available in two colors Midnight Black and Sparkling White.

On the other hand the W902 phone delivers music as well as photography capabilities. It is equipped with a 5 megapixel auto focus camera with up to 16x digital zoom. Also the phone boasts allied photography features including Picture blogging, Video blogging, Photo feeds, Video recording etc. Shake control and SensMe are some other features that the W902 employs. Talking about the internet capabilities, the latest phone allows users to access Google Maps and enables Geo tagging of photos too. The Sony Ericsson W902 phone will be available in three shining exteriors such as Volcanic Black, Wine Red and Earth Green.

On the occasion of the launch Ben Padley, Head of the Music Category at Sony Ericsson said, “Since the launch of our first Walkman phone in 2005, Sony Ericsson has continued to pioneer a superior mobile music experience – and the 77 million Walkman phones sold to date are testament to this commitment.”

“With this latest range of phones and accessories, we are offering high quality sound and a rich feature set that cements our position as a leader in the music phone category. We are pushing the boundaries of what people think is possible and are offering best-in-class sound quality and our most exciting Walkman phones to date,” added Padley.

The pricing and availability details of new Walkman phones have not disclosed as of now.