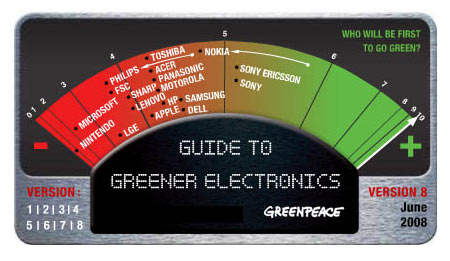 Greenpeace has revealed 8th edition of Greener Electronics Guide. Through this quarterly published guide, the organization ranks top mobile phone, computer, TV and games console manufacturers according to their policies and practices on toxic chemicals and take-back.

International toxics campaigner Iza Kruszewska, Greenpeace said, “Electronics giants pay attention to environmental performance on certain issues, while ignoring others that are just as important. Philips, for example, scores well on chemicals and energy criteria, but scores a zero on e-waste since it has no global take-back polices. Philips would score higher if it took responsibility for its own branded e-waste and established equitable global take-back schemes.”

The Greener Electronics Guide for June 2008 shows that Sony Ericsson is the greenest companies amongst all. Greenpeace said that Sony Ericsson has scored almost top marks on all of the chemicals criteria. Its new phones are PVC-free and subsequently it has also banned antimony, beryllium and phthalates from models launched since January 2008. Also Apple has met all the Energy Star requirements, claims Greenpeace.

Most of the companies have failed to hit the criteria of global standards of measuring impacts on climate change. Hence, Dell’s score is relatively poor. On other hand, Toshiba, Samsung and LGE could barely score anything on climate change criteria.

Nintendo and Microsoft, two console makers are at the bottom of the list scoring just above zero points. Even Microsoft has scored very low on climate criteria acquiring second last place of the Guide. Besides, Nintendo which had scored badly in last versions of Greener Electronics Guide has improved its score a bit. Greenpeace noticed improvements on its toxic chemicals and climate policy. However, Greenpeace has also remarked that Nintendo’s Wii console does not meet Energy Star standards that cover minimum energy efficiency standards for PCs and consoles.