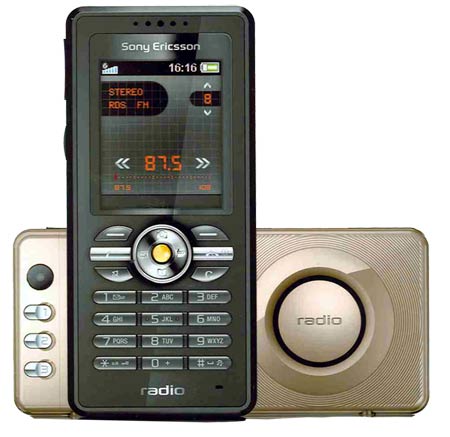 Sony Ericsson has introduced a new entry-level R300 Radio phone in India. The phone is targeted at radio enthusiasts in the country. The phone possesses a unique radio-inspired design with volume boosters for clarity of sound in noisy environment.

Not only FM frequency channels, but the R300 also supports AM frequency. Thus users can not only enjoy entertainment shows on FM but also can take advantage of live cricket commentary on AM.

Apart from that, the R300 phone features Preset buttons on the front of the phone allowing users to switch easily between various radio stations. It also allows volume to be increased or decreased with a single touch of the button.

In addition, the new phone sports a voice recording as well as radio recording function. The recorded tracks can be used as an alarm tone. There is also a TrackID feature included in the phone.

The R300 phone allows comes with a built-in VGA camera.

“We are witnessing unprecedented growth in smaller towns and cities and plan to increase our geographic presence in such places with launch of the Radio phone R300. The growing popularity of the radio in the tier two and tier three cities has created a tremendous opportunity for penetrating such markets and we are confident that our new offering will be well received by our consumers” said Sudhin Mathur, General Manager, Sony Ericsson Mobile Communications, India.

Sony Ericsson R300 Radio phone is available in the Indian market at the price of Rs. 4,395.