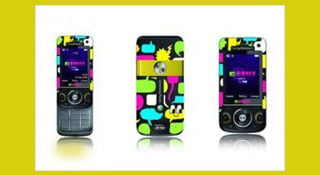 Youth Icon and popular music channel MTV gets their stamp on the elegant Sony Ericsson phones and dispatch it away to rock the mobile markets. Sony Ericsson and MTV have been popular names in the youthful dictionary and to target the apt markets, both the companies launch the W760i MTV Edition in Europe.

The Sony Ericsson MTV Edition phone boasts about its GPS functionalities and excellent gaming features. Since it has the stamp of MTV, music is something that cannot be forgotten and the W760i phone promises an amazing sound clarity with a touch of FM radio facility as well. The Tri-Band phone provides quicker speeds with its HSDPA Functionality and will download music tracks and other content off the internet in a speedier manner.

The Sony Ericsson W760i phone also packs in the Active Speaker MAS-100 and for its protection comes the protective case as well. The W in its model number clearly denotes about its walkman phone feature and this walkman phone colors its body with bright colors which can suit the youth of today. The phone though available in Europe by now, the pricing details is yet unclear.