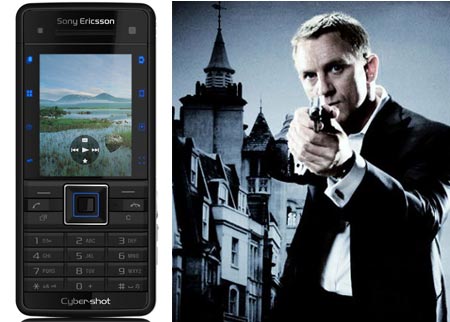 The limited edition of James Bond C902 phone will not only be colored in silver but will also be loaded with a host of 007 content. That means the phone will be preloaded with the trailer of the anticipated film, behind-the-scenes interviews with the stars and other content including wallpapers, screensavers and themes. In addition spy-style game will also be featured in the Bond edition C902 phone.

On the occasion of the launch of the limited edition phone Lennard Hoornik, Corporate Vice President and Global Head of Marketing, Sony Ericsson said, “We are excited to announce the continuation of our relationship with the James Bond films and unveil James Bond’s new phone for this year – the limited edition version of our C902 Cyber-shot phone. With the rich array of content both on the phone and preloaded on a memory card bundled with the C902 Titanium silver limited edition, fans of the secret agent will only get more James Bond with Sony Ericsson.”

Apart from the special Quantum of Solace content, the phone will be equipped with regular C902 Cyber-shot phone features such as 5MP camera with Face detection, Photo flash and Auto focus. Features like media player, FM radio, 3D games are also included with the silver titanium C902.

The limited edition phone will be available in Q4 of 2008 for limited period. The pricing details have not been announced as of now.