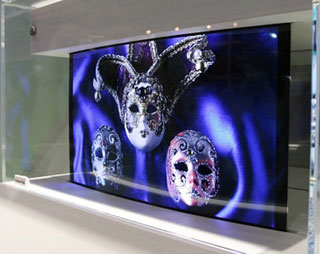 Okay, as Sony believes, rigid OLED screen are the things of the past. And to convince consumers on that point, Sony has come out with flexible transparent OLED screens.

The latest technology is enabled by the upconversion of red/infrared light. The developers used combinations for the organic compounds in the viscous polymeric matrix for foldable screens and no the folding of the screen does not distort the image.

Sony was accompanied by Max Planck Institute in Germany for research on the flexible OLED screens that have finally materialized. “Rigid television screens, bulky laptops and still image posters are to be a thing of the past,” the team declared at the exhibition.

“To the best of our knowledge we demonstrate for the first time a versatile color all-organic and transparent UC-display. The reported displays are also flexible and have excellent brightness,” the researchers said.

The flexible OLED screen showcased by Sony at the CEATEC 2008 (as seen in the image via DVICE) is an 11 inch display with a thickness of 0.3mm.

When these screens will be commercially available has not been declared by Sony.