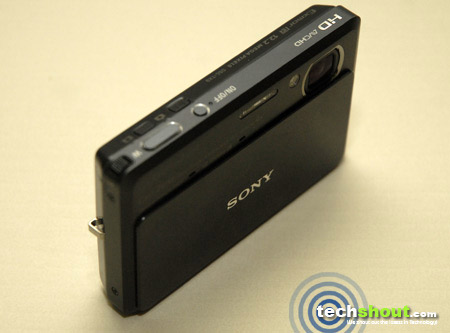 Cameras are like time-machines, in a manner of speaking. They let you go back in time and relive those memories worth remembering while wisely preventing you from interfering with time because ‘awful things happen to wizards who’ve meddled with time’. They’re perfect for satiating mankind’s urge to chronicle everything in visual form as evidenced by the wondrous Paper Museum of Cassiano dal Pozzio. Cameras have been evolving in all sorts of directions from simple point and shoot varieties to those of the interchangeable lens category. While Sony may have a series of cameras as well as phones under the Cyber-shot badge, it’s the former that may be better known among regular consumers. When The electronics giant swung by with the Sony Cyber-shot DSC-TX9, we were only too happy to review this sleek little snapper which boasts of 3D Sweep Panorama, a 12.2MP back-illuminated Exmor R CMOS sensor, 1080i AVCHD movie recording and touchscreen controls.

Tossed in along with the dark gray Sony Cyber-shot DSC-TX9 unit we reviewed was a multi-output dock, user manual, wrist strap, AV cable, USB cable, Paint pen, rechargeable Li-ion battery pack and power cord. The bundle also included a CD-ROM containing the Cyber-shot application software and the virtual Cyber-shot Handbook. When we first wrapped a hand around the camera, it felt rather like a solid, sleek brick that wouldn’t break even if we slugged it a few feet away. We didn’t actually yield to the temptation out of consideration for the 3.5” Xtra Fine LCD touchscreen’s feelings. By this time, the display was already looking greasier than a pack of McDonald’s fries. While Sony bothered to add a pen for touchscreen input, a screen guard is actually in order since the display takes to scratches almost as amiably as it does to fingerprints. The multi-dock we mentioned earlier features a camera connector terminal and jacks for DC in, USB, HDMI and stereo A/V out. 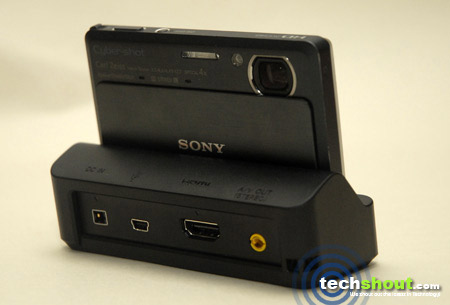 One glance is enough to tell you that the build aesthetics are a big talking point about the DSC-TX9. In spite of the strictly rectangular appearance, the device appears far from boring and the panel hiding the lens is not just cleverly designed, but also practical. It protects the lens from damage during transit and glides down and away from it on a sturdy sliding mechanism. The lens cover also switches the camera on and off when it’s slid downwards and upwards, respectively. An on/off button, shutter button, zoom lever, tripod receptacle, multi-connector as well as battery and memory card compartment litter the edges of this Cyber-shot member. Additionally, dedicated buttons for playback and still/movie mode perch themselves on the top besides the on/off and shutter controls. The camera does away with the viewfinder and all that faces the photographer is the generously proportioned LCD panel.

Once we switched on the Sony Cyber-shot DSC-TX9, we became sharply aware of how manufacturers have been packing in cartloads of features into such devices lately. For those who just can’t do with life as it is, Photoshop and in-camera options permitting tweaks to images and videos are indubitably the best things to have touched photography. At the same time, the on-screen icons branching out into numerous other content capturing options could look a bit intimidating to users progressing from a very basic point and shoot to this baby. Starting from the top left corner and going in an anti-clockwise direction, the display is dotted with icons for the menu, movie mode, self-timer, defocus effects, skin softening effects, playback, recording mode and so on when the camera’s in movie mode. When it’s set to snap up pictures, the screen throws up icons for the menu, ISO levels, flash settings, self-timer, macro settings, playback, recording mode and more in the same order. 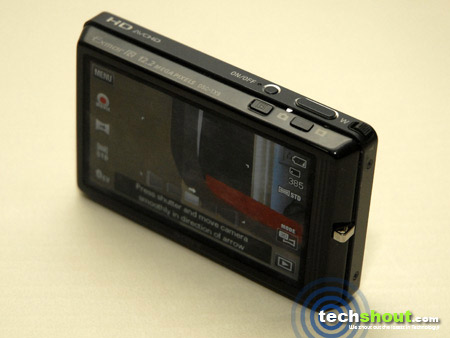 The menu options for movie mode include those for Auto or Underwater scene shooting, white balancing, sweeping away the displayed icons and multi – or center-metering. The embedded microphone on the front face is excellent at picking up sounds clearly while recording videos in AVCHD format. We don’t feel the need to comment much on the video quality which is as good as it gets on such an offering. There is an exhausting, albeit useful, number of menu choices for still photos covering exposure settings, white balance, burst settings, three focus options, three metering modes, face detection and so on and so forth. The 3D capturing function sticks only for still images and encompasses 3D Sweep Panorama along with Sweep Multi Angle. Unless you want panoramic scenes to look like a school kid’s collage art, both modes need a steady hand to hold this camera which incorporates a Carl Zeiss Vario-Tessar lens and 4x optical zoom. Unfortunately, the various adjustments made intuitively by the gadget render pictures of poorer quality as compared to regular photos taken by it. These 3D attributes are among the few novel features which make it any different from the TX7.

3D Sweep Panorama records proper 3D views and you can have fun watching the sequential components of a Sweep Multi Angle shot crash into each other as you tilt the camera from left to right and vice versa during playback. It’s a real tease while any of the two panorama modes are used; first accusing you of swinging the device across too fast and then racing to capture a wide view so that a blank gray space completes the portrait when you don’t manage to move the hands quick enough. We found the Sony Cyber-shot DSC-TX9 to perform well under poorly lit conditions at an ISO sensitivity level of 400 to 800. Crank it up any higher than that and the image noise is way too apparent in the washed out photos delivered to you. The Superior and Intelligent auto adjustment modes barely surface a significant amount of difference in the image quality and a few basic retouches and effects including hearts or exclamation marks can be added to content. Even high contrasts don’t bother this Cyber-shot addition, with very little fringing seen in objects silhouetted against fairly bright lighting. When all’s said and done, this Sony product can call itself a user-friendly device meant for the mainstream consumer market.

It is loaded with a range of useful and interesting capture options from 3D Sweep Panorama to Underwater scene.

Images and videos simply leap out of the bright LCD so that you don’t need 3D to have your eyes glued to the screen which also happens to be highly responsive.

The exterior is a rather pretty sight with the firmly streamlined construct, sliding front panel and gray hue, though it may also be picked up in red.

The image quality is not at its best behavior when it’s set to ISO levels of 3200 and even seems to lack in sharpness sometimes.

Around 50 photos and a couple of two minute FH quality AVCHD videos are all we got out of the 60% full battery.

The Rs. 21,990 price commanded by the Sony TX9 camera may seem a wee bit heavy for some. Is it value for money? It’ll depend on how much you’re willing to shell out for a device from a well accepted lineage. At the same time, you’re paying not just for the looks, but also for the huge array of features that Sony has squeezed into this device without appearing to break a sweat. We like the Sony Cyber-shot DSC-TX9 enough to give it an 8.5 out of 10 rating.