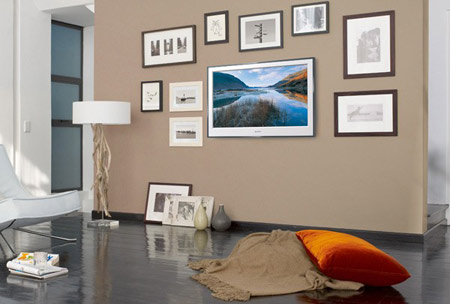 Sony has released the new Bravia E4000 series HDTVs. The elegant looking series of the HDTVs include three sizes, 26-inch, 32-inch and 40-inch.

Sony claims that the stylish E4000 series TVs make an elegant addition to any room décor. The 26-inch 32-inch and 40-inch Full HD models come along with a stand, that enables it to be kept on the TV trolley or they can also be mounted on the wall.

The E4000 series TVs feature Picture Frame Mode that displays the owner’s favorite image on screen, when he/she is not watching the TV. That means these TVs also can be used as photo display frame.

When in Picture Frame Mode, the E4000 consumes 35% lower power than watching TV. Also the TVs feature power-saving Standby Mode after a preset time hence the power is not wasted. In the stand-by mode the new E4000 TVs consume only 0.19W of power.

As expected from Sony, the E4000 delivers better picture quality. Thus apart from watching TV these models can also be used for watching DVDs, movies on Blu-ray Disc, for gaming sessions and also for HD footage captured with camcorder.

No information regarding pricing and availability is disclosed.