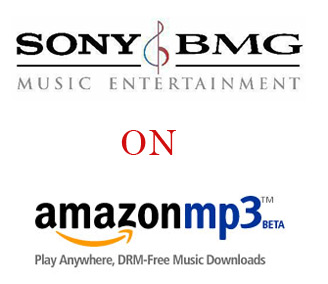 In recent times almost every major music label has begun selling music online without any form of copy protection, allowing the music to be burned onto various media. The only one left was Sony BMG Music Entertainment, who had refused to sell its songs without Digital Rights Management (DRM) coding, preventing them from being copied.

Now, Sony BMG has given in and has announced that Amazon MP3, Amazon.com’s digital music store will offer songs by its artists. Amazon’s store is a DRM-free MP3 digital music, which allows users to buy music, after which it can be played back on almost every music device including PCs, Macs, iPods, the iPhone, Zune, Zen, RAZR and BlackBerry devices.

Since Amazon MP3 sells songs only in the MP3 and DRM-free format, the music can also be burned on to CDs and copied to PCs, besides playing it back on digital media players.

Amazon MP3 customers can use any music management application including iTunes or Windows Media Player to organize their music and burn songs to CDs.

The Amazon MP3 store which was launched in September 2007, now included over 3.1 million songs from over 2,70,000 artists in the MP3 format without DRM software and encoded at 256kb/s to deliver high quality audio.

It is said that when Sony BMG joins Amazon MP3, the store will be the only online retailer to offer DRM-free MP3 from all four of the major music labels, together with 33,000-odd independent labels.

Sony BMG artists such as Bob Dylan and Jennifer Lopez will begin showing up on Amazon MP3 store this month itself.