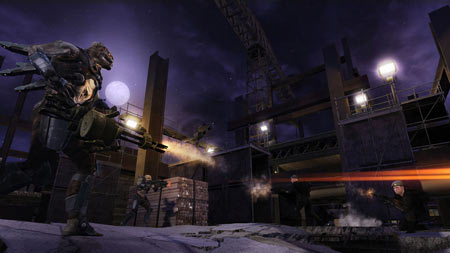 Resistance 2 is a sequel to the Resistance: Fall of Man and is an eight-player game plus provides online-co-op campaign and 60-player online competitive multiplayer.

With the new game comes the redesigned MyResistance.net for rich social networking features and a stat-tracking system with scope for user customization says Sony.

The new game features original weapons like Splicer and redesigned Bullseye. The fight against Chimera continues in the sequel now set in United States. Players can assume the role of US Army Lt. Nathan Hale and face the battlefield even whilst struggling against the Chimeran virus in him. Players get the help of genetically-enhanced soldiers who are known as Sentinels in their quest.

With Resistance 2, players get three character classes of Soldier, Medic, and Special Ops which gives them the advantage of weapons and attributes unique to each class.

Also a bonus of Blu-ray disc with the collector’s edition that features “America Forever Lost”, Behind The Scenes video of Resistance 2 with Insomniac Games, “Shattered History” Resistance chronology video, a preview of the upcoming “Resistance: The Gathering Storm” novel and digital copy of Resistance comic book issue #0.

The game has been rated as M for mature by ESRB.