The Sony Alpha A3000 has just been put forth by the Tokyo-based company which rather prefers to call this compact snapper a ‘DSLR-style camera.’ This new device from Sony is essentially a point-and-shoot camera equipped with advanced features that include an Exmor APS-C HD CMOS sensor, lens mounting capability and an electronic viewfinder. Set to be made available in early September 2013, it will have its price set at about $400. This device will be paired with a black 18-55mm zoom lens, and its compatibility with Sony’s E-mount interchangeable lenses will ensure the availability of a number of different options for users.

The Sony Alpha A3000 grabs its DSLR-style tag thanks to its 20.1MP APS-C sized image sensor which is said to be of the same size as those found in DSLRs these days. This apparatus helps in capturing highly-detailed images and full HD videos owing to its ability to grab more light and cut image noise. The Sony camera also kicks in an electronic Tru-Finder viewfinder boasting of a 100 percent field coverage. Apart from displaying key information to users, it even grants a live preview of a composed image so as to demonstrate the effect of any setting adjustments. 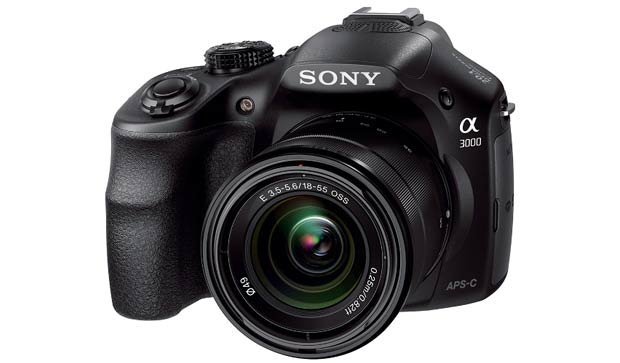 This feature will also apply to its LCD when Live View is switched on. A standard P/A/S/M mode dial as well as a number of customizable control buttons also make their way onto the Sony Alpha A3000. Furthermore, this camera incorporates a Multi Interface Shoe terminal for attaching compatible accessories like a flash and more.