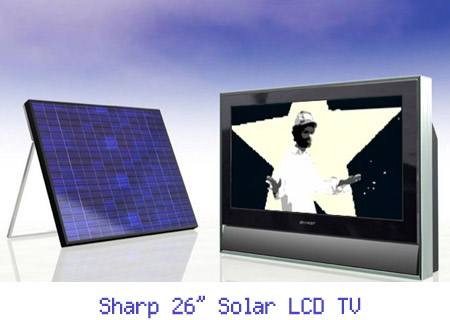 Want some solar power for your entertainment? Voila – the Sharp solar TV that runs on the power of the sun; for some bright entertainment and bright future of the world.

The Solar-powered 26 inch TV prototype from Sharp was exhibited by the company at the G8 summit in Japan from July 7-9.

The LCD TV prototype claims to consume just one-fourth of the power that a normal CRT TV and its total consumption is just one-third the total used by the normal TV annually.

The LCD TV is powered by Sharp’s triple-junction thin-film solar cells modules that, just as big as the LCD screen. The pair – TV with the solar system will be made available as a pair to the consumers.

Also, Sharp, in bid to save energy and “create energy”, displayed the 57-inch AQUOS TV, a solar-LED lighting module and an ultra thin (20-mm) 65-inch LCD TV which uses just half of the total energy consumed by the traditional LCD TVs use, annually.

Sharp also displayed semi-transparent see-through solar cell module that is created from a laser-trimming technology in order to create optically transparent slits on the cell. These can be used as curtain walls or in skylights, ie as an architectural elements reports Physorg.