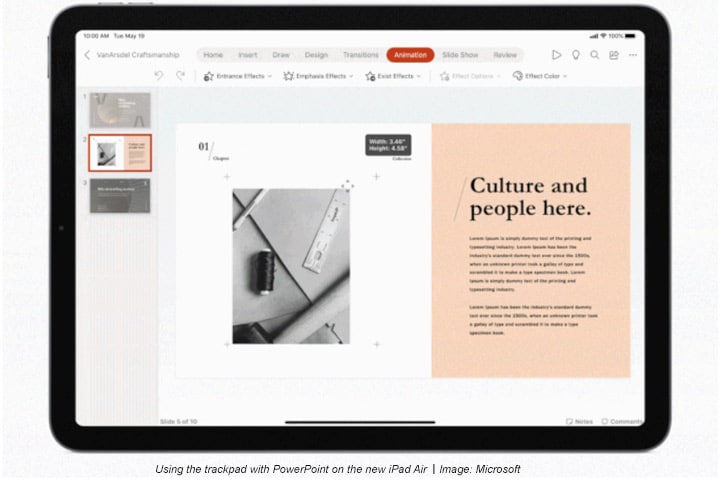 Microsoft has finally brought mouse and trackpad support to its Office family of apps on iPad. The Office for iPad updates are now live in the App Store for Word, Excel and PowerPoint.

The latest iPad Pro, iPad Air and iPad models have introduced powerful new features and capabilities to enable people to be productive in more ways.

“Accordingly, we have made several updates to the Office apps to take advantage of these enhancements and make it even easier to work on iPad,” Microsoft said in a statement late on Monday.

When moving a finger across the built-in trackpad of Magic Keyboard, the cursor transforms into the tool you need depending on the content you’re pointing to.

“And using a mouse or trackpad with iPad for common tasks like highlighting a passage of text in Word, selecting a range of cells in Excel, and moving and resizing graphics in PowerPoint are as simple and intuitive as ever,” Microsoft said.

This experience will immediately be familiar to anyone who has ever used Office on a Mac or a PC and helps make the iPad even more versatile and capable to get more work done.

Microsoft said it is updating the overall user experience in Word, Excel, and PowerPoint with new start screens and a new ribbon of feature menus.

“These updates reflect the recent design enhancements we’ve been making with our Fluent UI which you’ll see across the Microsoft 365 experience“.

Many users have already started receiving Office for iPad updates through a phased roll-out, which should reach all users within a couple weeks.

Microsoft said additional updates which people will see over the next few months are as multiple document support in Excel, powerful contextual menus, and offline file support for cloud files.