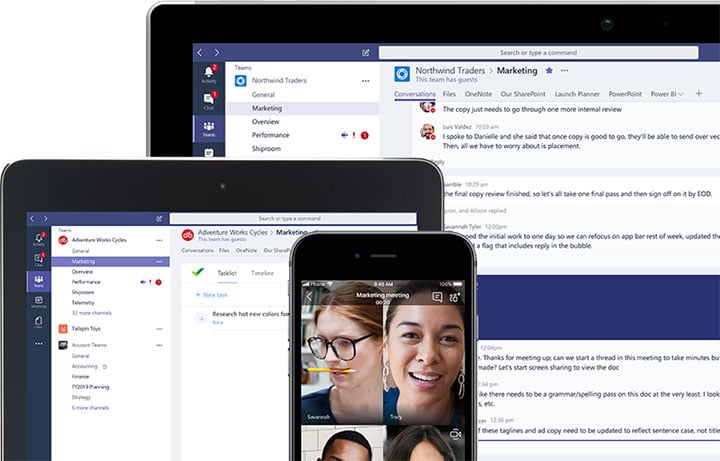 Some people might not have heard about Microsoft Teams even if they are familiar with Slack or Trello. While nobody from the tech giant would admit it, the elephant in the room should be addressed—the Teams app was created to compete with Slack Technologies.

However, it would surprise you to know that most big businesses prefer Microsoft Teams over Slack. According to data published in December 2019, the daily number of active users for Teams is hovering around 20 million. In contrast, Slack is only around 12 million users.

The CNBC’s Technology Executive Council Survey revealed that nearly 6 in 10 of the big firms are using Microsoft’s solution, and only 3 in 10 have installed Slack. To help shorten the learning curve, you have Microsoft Teams Services that will help companies during the transition period and maximize the app as it was designed to be used.

Both offer the same collaborative capabilities, but here are where Teams has the edge over Slack:

Both Teams and Apps are known for the efficiency and flexibility of their messaging features. You can tag users and converse in group chats or private messaging. There’s the AI assistance, native app integration, GIFs, and emojis. However, Microsoft made it easier to insert GIFs via the toolbar at the bottom of the screen. To compare, you need to type in the command “/giphy image name” on Slack.

What makes Teams more appealing to big businesses is the native integration of the Office 365 suite. It means you do not have to log out of the account to access Excel, Word, Notes, PowerPoint, Meetings, and other applications. When the leader starts Teams, it is automatically saved into a folder that can be opened using Word or Excel. So, you can access the file and work offline.

Another advantage of Teams is that it allows your company to tap into Microsoft Power BI, a powerful business intelligence tool that will enable you to produce visuals using the curated information. The app comes in handy to attach graphs, high charts, leaflets, and other visual tools. Again, you do not have to go out of Teams to be able to do this, so it does not waste your time.

The Teams app allows you to connect with as many as 250 people using voice and video call during a meeting. In contrast, Slack has a limit of up to 15 people in a conference call. The app also offers screen sharing, a feature that is not available in Slack.

In essence, Microsoft Teams is more complex compared to Slack, which may be the reason why some offices are intimidated by it. Some people have noted how daunting it is for them to start with the former due to the time needed to learn all its functions.

However, Microsoft Teams Services are available to maximize all the features of the app for smoother collaboration and more effective communication.

One of the advantages of Slack before was its freemium plan, which was not available to Teams. However, in July 2018, Microsoft offered a similar service, enabling it to overtake its competitor.