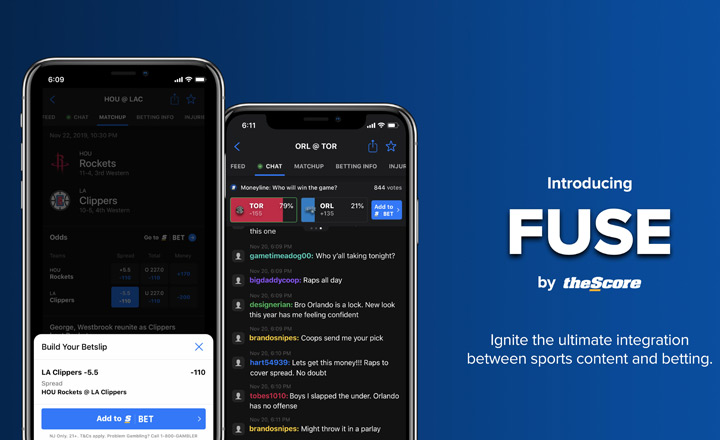 Toronto-based Score Media and Gaming has released a new app called Fuse, with the aim of offering an integrated experience for its media and sports betting platforms. Available for iOS devices right now, Fuse acts as a hub for the company’s popular sports app, theScore and its mobile sportsbook app, theScore Bet. The thing to be noted here is that just like many other sportsbook mobile apps for New Jersey, this one too works only in the said state for now. However, expansion into other territories is bound to take place in the near future.

Using Fuse, users can now create betslips from within theScore sports app for the first time. These include markets for moneylines, spreads as well as totals. theScore’s media app box has been brought into Fuse moreover, enabling users to make the most of the deep data, scores and statistics. This, in many ways, educates the users in better creating their new betslip. They can then enter directly into theScore Bet portion of Fuse, where an added layer of security is added by Apple’s Face ID integration.

John Levy, the founder and CEO of theScore said about this new app, “The launch of theScore Bet revolutionized the integration of sports betting and media, and the introduction of Fuse takes it to another level. We’ve created an unparalleled cross-platform media and betting experience, getting sports fans into the action faster than ever. Our goal is to continue to surpass sports fans’ expectations while leading the way for media in the sports betting industry. And with Fuse, we’re only getting started.”

theScore Bet was launched by Score Media and Gaming this September, and it created history by being the first mobile sportsbook to be crafted and launched by a media company in North America. It has been built as a comprehensive mobile sports betting platform operating with a market access agreement with Darby Development LLC, the operator of Monmouth Park Racetrack. Moreover, theScore even has market access across 11 additional states through its partnership with Penn National Gaming, but the expansion is pending right now owing to approvals and licenses, and the enactment of state gaming laws. According to Legal Sports Report, theScore’s distribution of users seems to be associated with US population density, which is why progress in states like New York, California, Texas and Florida will be important for the service.

Fuse can be downloaded now through the Apple App Store.