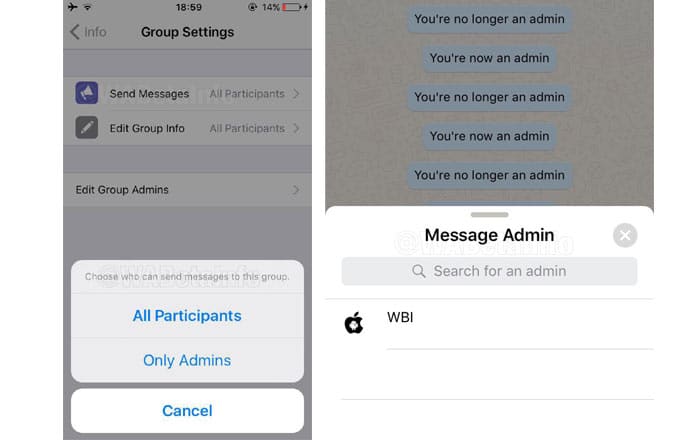 WhatsApp has got a new feature for groups which could help stem the flow of spam messages. Admins can now decide who can send messages in a group.

This is the latest in a long line of new admin controls which allow only those in charge to change the group subject, info and description, in addition to deciding who to remove as an administrator. This new tool is rolling out to WhatsApp for Android version 2.18.201, WhatsApp for iOS version 2.18.70, and WhatsApp for Windows Phone.

WABetaInfo notes that Windows Phone and Android users are receiving the change very slowly. People can try backing up their chat history and then reinstalling WhatsApp to see if the update has made it in. If it has, they can go to any group they’re an administrator of, head to Group Info, and then dive into Group Settings.

Here they’ll see a Send Messages option. Tapping on it will open up 2 choices. They can either choose to allow All Participants to send messages in the group or Only Admins. If they pick the former then everything stays as it is and anyone can share texts, images, or videos within the group.

If they pick the latter, then only they and their fellow admins, if any, can communicate on the WhatsApp group. The others will get a notification about this. The text box won’t be present anymore, replaced by a sign which says “Only admins can send messages.”

If it’s an emergency, members of the group can message the admin directly. It’s up to the admin whether they want to reverse the policy or just post whatever the person said. The feature delivers a considerable amount of power to an administrator.

If they want to, they could just shut down the group for the night so that no one can send a text and disturb the other participants. They could even enable it to make sure only their messages get through and it doesn’t get lost in between other missives.

You can download WhatsApp for Android via the Google Play Store, for iOS via the App Store, and for Windows Phone via the Microsoft Store.