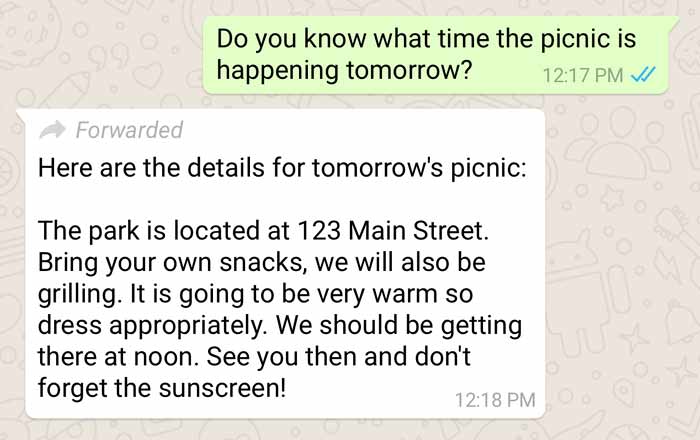 WhatsApp will now mark all forwards with a ‘Forwarded’ label in a bid to stop the spread of spam and fake news. The feature has actually been around in the beta version of the app for months now and is finally ready to roll out to the public.

Both WhatsApp for Android and iOS are getting the tool right now, so you’ll have to download the latest version of the app to check it out. Once it’s set up, you’ll see a ‘Forwarded’ label at the top of forwarded messages. This way, you’ll have an easier time telling whether the person who sent you the missive actually wrote it or not.

That’s only one part of the equation though. The other part requires you to examine whether the forward contains genuine information. Some folks may just ignore this step and believe the text anyway, regardless of whether it’s a forward or not.

There’s also an easy way for people to spread fake news anyway. Instead of sending the message through WhatsApp’s in-built forward option, they could just copy-paste the text and send it as a fresh message.

WhatsApp’s been under a lot of pressure lately to do its part in curbing misinformation. The Indian government recently asked the app to do something about this crisis in the wake of mob lynchings and murders happening around the country because of false information.

Also Read: WhatsApp will now warn you against suspicious links

WhatsApp replied to the IT Ministry in a letter asking civil society, the government, and tech companies to work together to stop misinformation and inflammatory content on its platform. It later published ads in several leading newspapers to further this cause, pointing out ways to tell real news from fake news.

You can download the latest version of WhatsApp via the App Store and Play Store.