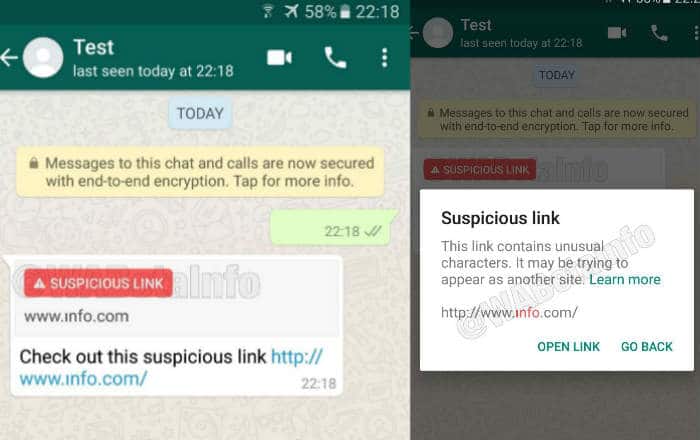 WhatsApp is taking on the rapid spread of spam on its platform by launching a new Suspicious Link Detection feature. The tool is being tested in the app’s Android beta build version 2.18.206 right now, so you might have to wait a while before it rolls over to the official build.

As per WABetaInfo, Suspicious Link Detection basically scans a link which has been shared with you and analyses whether it will take you to a fake or alternate website. If it catches a malicious URL, WhatsApp will mark the message with a red label clearly stating “SUSPICIOUS LINK” preceded by a warning sign.

If you decide to ignore the alert and click the link anyway, WhatsApp will try to warn you again in a pop-up window. The text informs you that the link contains unusual characters and may be trying to appear as another site. It then presents you with two options – Open Link or Go Back.

It seems all this link scanning will be done locally on your device. This means that the URL won’t be sent to WhatsApp’s servers. Still, some might feel like the feature is a violation of their privacy, especially since the chat app promises end-to-end encryption.

WhatsApp is still working on adding new features to Suspicious Link Detection. For instance, you’ll be able to manually report a suspicious link if the company’s system doesn’t work. Besides this, the app’s Android beta version has another measure to stem the flow of spam – labeling forwarded messages as forwards.

Also See: WhatsApp admins can now stop others from sending messages in a group

Right now, messages sent on WhatsApp don’t have any kind of labels on them. This allows texts to appear as if they’re facts instead of forwards filled with made-up facts. Adding a “Forwarded” label will help clear this confusion.

You can download the latest WhatsApp for Android beta here.