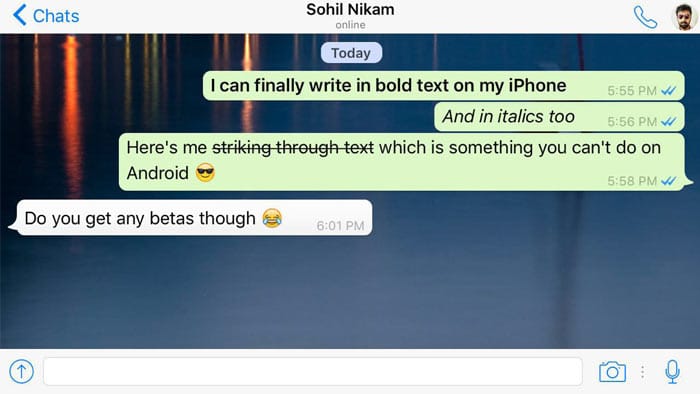 It’s time for iPhone users to start enjoying the text formatting options which were introduced earlier only for Android devices. The iOS version of the messaging app has been blessed with an update that grants it the ability to write text in bold and italics, and even lets you access the strikethrough formatting feature.

That latter trait is something that’s new, as it wasn’t available in the Android version that was released a few days ago. But those on Android need not worry, as it’s available in a beta version of WhatsApp right now. This particular version is numbered 2.12.561, and can only be grabbed by those who have registered for the app’s beta testing program.

As for the main Google Play store version of WhatsApp, it is currently getting the hitherto beta-exclusive bold and italics ability. Coming back to the iOS edition, it can be noted that while this version has all the three formatting options, it also allows all of them to be used on the same text.

The newest version of WhatsApp for iOS can be downloaded through the Apple App Store now. Android users can go for the Google Play version if they haven’t gotten the bold and italics feature yet, or they can even jump into the beta program to get those features as well as the new strikethrough addition.