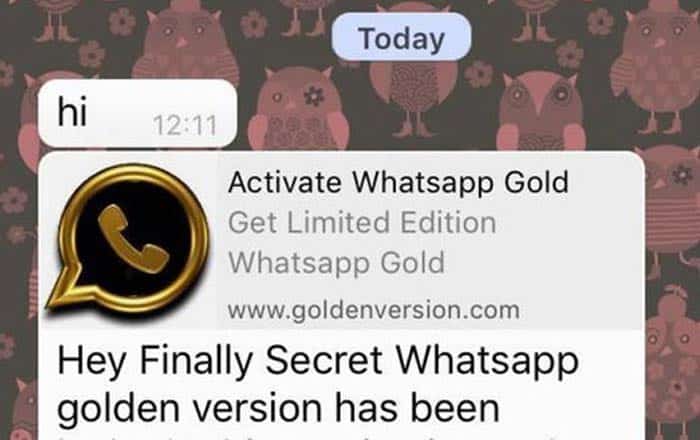 WhatsApp Gold may sound like an exclusive version of the app, but it’s actually the name of a scam which has recently been doing the rounds. The attackers behind the malignant software are sending out a phishing message to potential victims trying to get them to download it.

The hackers are following a simple strategy to make this possible. The message claims that WhatsApp Gold is a secret invite-only upgrade of the tool which only celebrities have access to. The concept isn’t that far out from the realm of possibility given the existence of apps like Facebook Live which was available only for famous people upon its launch.

If the celebrity angle isn’t enough, the makers behind WhatsApp Gold are also trying to entice targets by promising them things which the standard-issue WhatsApp doesn’t offer. This includes video calling, more emojis, and the ability to delete messages after sending them. The attackers even swear the update will allow users to transmit 100 photos at once.

The convinced victims are then asked to click on a link to a website which has been stuffed to the gills with malicious software which can steal their personal information. Anyone who receives a message about WhatsApp Gold should delete it immediately. The application notably isn’t listed on the Google Play Store or Apple App Store.

This isn’t the first time WhatsApp has been hit by a fake version claiming to offer enhanced benefits. The famous WhatsApp Plus scam got to the point where the former banned users utilizing the latter, warning them that third-party apps can pass on sensitive data without their knowledge or permission.