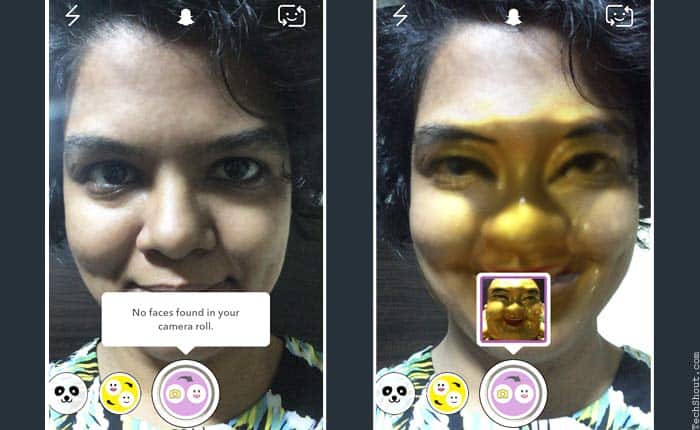 Snapchat users can now face-swap with images from their phone’s camera roll instead of trying to force themselves and a friend or magazine photo or whatever else into the same frame. As seen in the photo above, it allows you to swap your mug for another one previously shot through your camera. More range for experimenting with various faces now.

Paid replays of snaps at $0.99 for three replays ($4.99 for 20) is no longer available. One free replay is all you can enjoy from now on. Considering the shuttering of its virtual Lens store in January and the latest scrapping of paid replays, the company may be keen to focus on earning money through ads rather than in-app purchases by users.

Of course, the entire point of Snapchat is that you can send a ‘self-destructing’ snap or video to friends without the fear of them saving or sharing it. As for the short-lived Lens store, it enabled users to purchase filters for their photos. It looks like sponsored filters by marketers is a more attractive prospect for making a profit out of the app though.

In ode to singer Prince, Snapchat also released a Purple Rain geofilter which adds animated purple rain drops to your picture. Since it’s a geofilter, you may or may not be able to see it based on your location. You’ve gotta admit – this one’s classier than the app’s recent Bob Marley ‘blackface’ filter.

Snapchat’s new update to its face-swap feature is live on iOS. It appears to be a staggered release on Android.