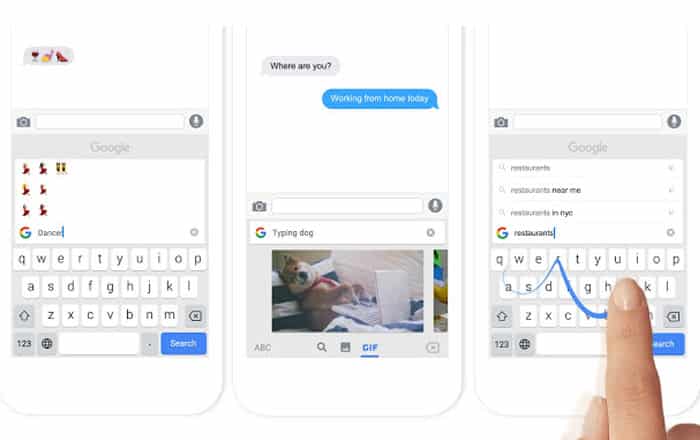 Google’s cool new Gboard app for iOS has finally made its way outside the US to other countries including India about a month after it first made its debut. The company still hasn’t released the keyboard for Android devices though, which is pretty surprising considering it usually caters to that audience first.

iPhone and iPad users in India are now free to take advantage of the useful features which Gboard brings to the table. The keyboard basically invokes the power of Google Search to a user’s fingertips, allowing them to seek out any query without having to constantly switch to another app to do so.

For instance, if a person is looking to make restaurant plans while talking to someone, they can use Gboard to instantly find places to eat near them rather than exiting the chat window and copy pasting the address manually. Results are shown in the form of cards for such inquiries, allowing the consumer to quickly see ratings, hours and phone numbers and send it to their friend.

Setting Gboard up is pretty straightforward. iPhone users just have to head to Settings, General, Keyboards and then add the app as a third-party keyboard with full access. Note that this means it’ll be privy to all the information flowing through a person’s conversations including sensitive details like their passwords.

Google has tried to assuage such concerns by stating that it doesn’t send anything other than a consumer’s searches and usage statistics to its servers. Other than regular Search features, the new application also allows people to seek GIFs, emojis and contacts if it’s enabled.

You can download Gboard now via the App Store. The tool is only available in English right now, with plans to add more languages later.