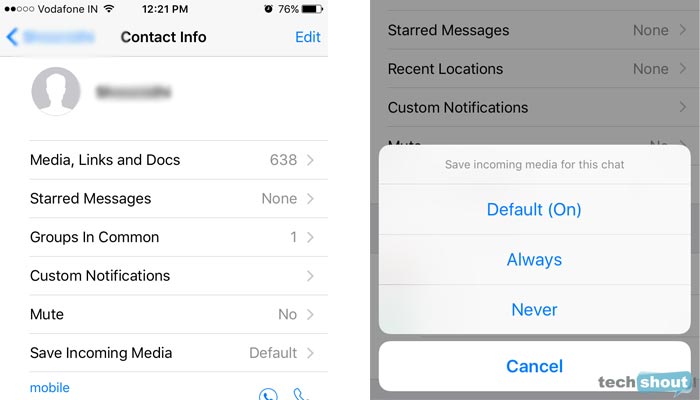 WhatsApp has sent out a new update for its iOS user base, close on the heels of an Android upgrade last week. However, the first is distinct from the second, with 4 fresh features but no sign of the latter’s newfound ability to write in bold and italics.

Instead, iOS users of WhatsApp will be greeted with the arrival of a new option which allows them to choose what incoming media they want to store away in their device. People were earlier forced to either save all their content or none of it. The update now lets them select specific chats or groups they wish to save pictures and videos from.

Given the lack of expandable memory in iPhones, this should prove to be a very useful feature for those who want to keep their phone from overflowing with media from groups or people they have no interest in saving. To activate it, iOS consumers must head over to contact or group info and tap on the Save Incoming Media option.

They can then choose between Default, Always or Never. Moving on to the second new feature, WhatsApp now presents missed calls within the chat window itself, instead of only in the separate Recents tab. Third, iOS patrons will now be able to pull down on in-app notifications in order to respond to it faster.

Finally, individuals now have the choice to share PDFs from other apps. In other WhatsApp news, a recent report has alleged that the application is looking to implement end-to-end encryption from voice calls and group conversations. The security measure is only in place for one-on-one chats as of now.

You can download WhatsApp version 2.12.16 via the iTunes Store.