TechShout
Home Software WhatsApp, why you gotta be so rude? 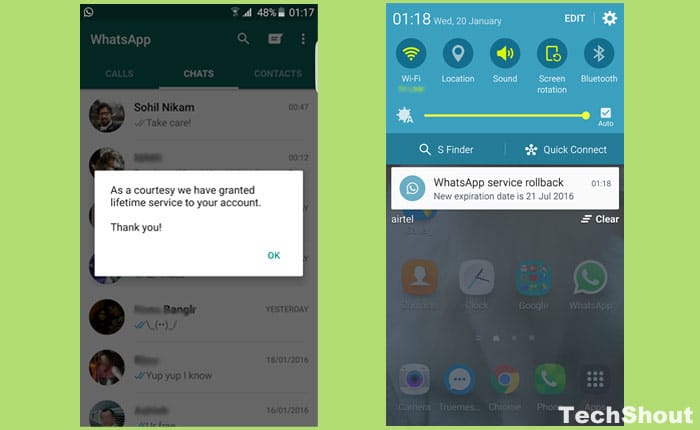 Remember how WhatsApp was supposed to go completely free of charge for everyone? It looks like the messenger app is having trouble committing to this decision. A few minutes ago, we received a message saying saying ‘As a courtesy we have granted lifetime service to your account.’ Just a minute after that, there was another beep and an alert titled ‘WhatsApp service rollback.’

In most developing markets like India, WhatsApp has been available free of charge. Low debit and credit card penetration was apparently the reason behind this. Users in countries like the US have been paying a negligible fee of about $1 a year after the first free trial period of 12 months. The app can be downloaded on Apple iOS, Android, Windows Phone, BlackBerry 10 and other platforms.

Related news: WhatsApp is now completely free for everyone

There’s also a desktop version of WhatsApp for those who prefer to receive their messages conveniently on the PC screen. The messaging application currently has about 900 million monthly active users. By being made a free service to one and all, it is likely to reach 1 billion fans very soon. We’re hearing renewed murmurings about Facebook wanting to push advertisements through the app.

When Facebook bought WhatsApp in 2014, theories were going around about the company’s intent to monetize it, a story which was quashed from the get-go. At least, it was too early to think about marketing through the app back then. 1 billion users probably seems like a better number. Of course, Zuckerberg can’t deny that he likes collecting wildly popular applications *cough* Instagram *cough*.

But to think WhatsApp may have just been an amazing IM tool he craved that would make up for Facebook Messenger’s comparably smaller fan base, would be foolish. The app feels like a more secretive way to share stuff with friends, than the social network. Without the looming shadow of Zuckerberg, it’s easy to forget who owns it and avoid wondering if your data is safe from advertisers.

As for WhatsApp taking its indecisive stance on free service for life, we’re not sure what that’s about. We’ve got in touch with the company and will update you if we hear back. 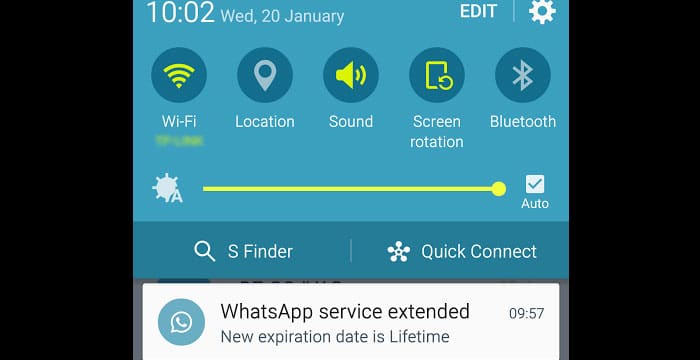 UPDATE: As you can see from the image above, the free WhatsApp for lifetime service has been reinstated to us. Anyone else got this message?