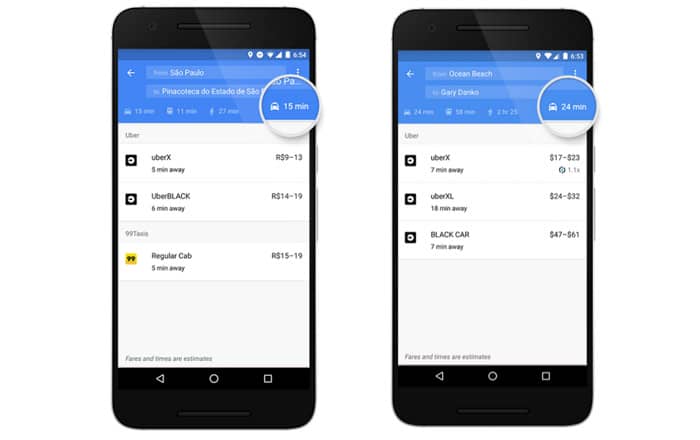 Google Maps knows by now that walking or public transit aren’t your only two means of transport when you’re not using a car or bike. It has hence expanded support for ride hailing apps in a huge way, allowing services other than Uber to be integrated into it.

An update will soon bless Google Maps with support for new taxi providers across five countries. Indians will be able to access Ola Cabs, while those in Brazil will get 99Taxis. Hailo compatibility will be added for Spain and the UK, with the latter also getting Gett support. Lastly, those in Germany and Spain will be able to access mytaxi.

What this feature of Google Maps does is that it offers a dedicated tab with information about ride services when you’re searching for a particular place. This allows you to quickly get a fare estimate and pick-up time if a car is available near you. That is of course, as long as the taxi app is installed on your phone.

You can then select the service and ride of your choice in Maps itself, and the app will then redirect you to the booking page on the other app. When applicable, you will also be shown multiple ride options from one provider, like uberX, uberXL and UberBLACK choices if you’re on Uber. This will allow you to easily compare the fares before making you final choice.

The Android version of Google Maps is first in line to get these new ride hailing features in the coming days. The iOS version of the app will be getting it soon, but the exact timeframe has not been revealed.