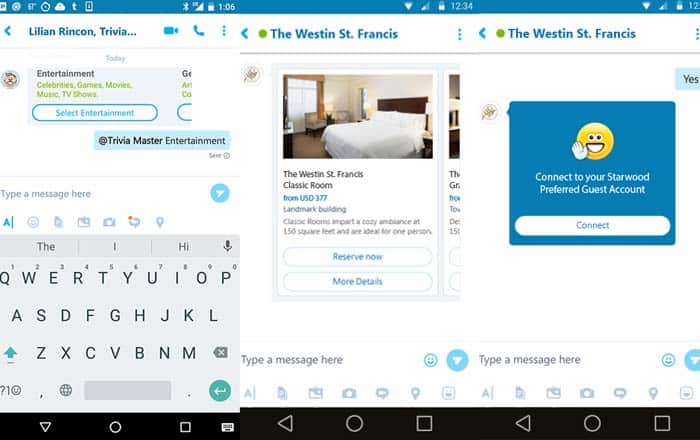 Microsoft has been hard at work trying to promote its Skype Bot Platform ever since the feature was first announced back in March this year. The company now claims that over 30000 developers have begun building chat bots for the tool. It recently announced a fresh set of additions for these developers to play around with.

Skype users can soon look forward to interacting with bots even within groups. Chat bots will now be able to engage in large group conversations, perhaps paving the way for companies to develop games which can be played among a large gathering of people rather than just one person versus a computer.

Developers have also been granted the opportunity to make bot interactions richer with the help of cards, carousels and receipts. For instance, if a consumer wants to book hotel accommodations, Skype can now answer their inquiries with pictures of the hotel’s rooms. They can even reserve the room right from the window and get a bill for it instantly once the transaction is done.

Microsoft is also bringing in third-party authentication into the mix to make such transactions simpler. If enabled, people will be able connect to a brand’s service by just signing into a card. This effectively means they have to authorize their credentials just once and be spared of having to do so over and over again with constant interruptions.

The new system basically ensures that users don’t leave Skype and venture to other platforms to get things done. Finally, Skype has collaborated with Bing to showcase a preview of Bing Entity and Intent detection in order to introduce natural language understanding to its Bots. The firm claims this is an industry first. It should make talking to the chat bots easier and more natural.