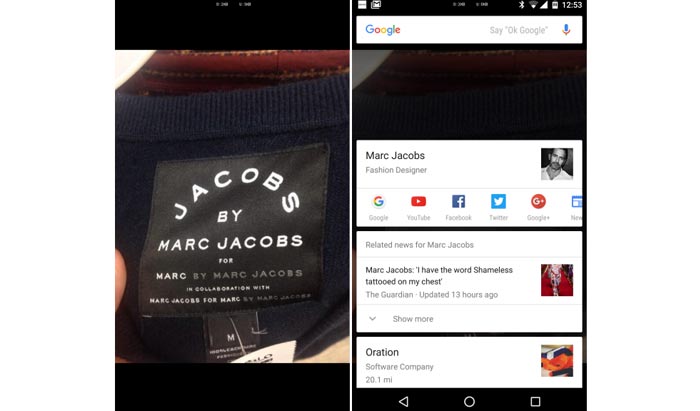 The already magical Google Now on Tap service has been made all the more so by its makers by introducing Optical Character Recognition or OCR features to it. In simple language, you can now click an image of something you don’t have enough information about and the service will easily deliver that for you.

Normally, Google Now on Tap is able to recognize text on your smartphones to give you additional information about the topic. What the new version has gotten the ability to do is recognize text in images to do the same. However, this feature seems to have received a limited test release, as it’s not being experienced by everyone right now.

Also, as has been pointed out by Android Police, its performance is very hit or miss at the moment, perhaps indicating that it’s in an infant stage. For the said website, OCR on Google Now on Tap was able to recognize the Marc Jacobs brand from an image of a t-shirt label, as you can see in the image above.

It appears, the service is able to do this from a captured image as well as when the camera viewfinder is on. For some, this might bring back memories of Google’s abandoned Goggles app. We now know what plans the company had when it stopped giving attention to the development of that highly impressive utility.

Google Now on Tap is an exclusive Android 6.0 Marshmallow feature which you can make use of anytime in order to grab additional information about the stuff that’s on the screen. Moreover, this can simply be done by long-pressing the home button.