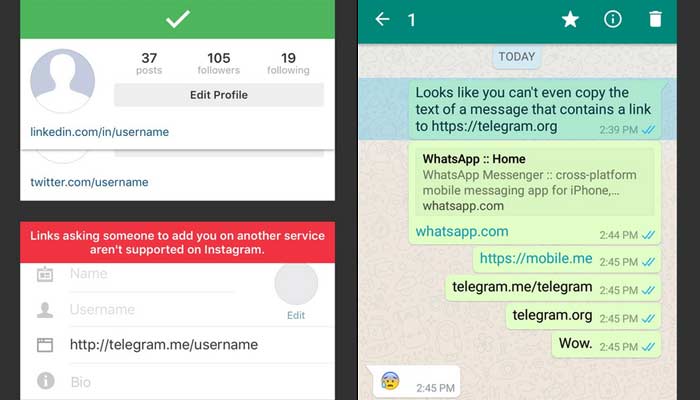 Instagram has started blocking certain types of links to other platforms such as Telegram and Snapchat from appearing in a person’s profile. With this move, the Facebook-owned app seems to be stepping up its rivalry with other services which may encroach upon its own user base.

In a statement, Instagram says only the ability to put up ‘add me’ links which directly add followers to outside services has been removed. It claims this was a rare-use case and not the way the site was meant to be utilized. Other URLs which just lead to a user’s Twitter account, YouTube channel, Blog or website can still be added to their Instagram profile page.

The change was highlighted by Telegram itself via a post on its Twitter page. The popular messaging service also pointed out that Android WhatsApp users still can’t send clickable links to Telegram in chats, a problem which had emerged back in December last year. The app’s founder Pavel Durov told TechCrunch that he thinks his platform is being explicitly targeted by Facebook.

It certainly looks like Instagram is practicing selective discrimination when it comes to third-party services. Blocking Telegram but not Twitter doesn’t make sense. One explanation is that both Telegram and Snapchat are direct competitors to Instagram, given the first’s in-built photo-editing abilities and the second’s image-heavy communication.

Durov thinks Instagram’s sudden decision to crack-down on external deeplinks was triggered by Telegram crossing the 100 million monthly active users mark recently. This combined with the popularity of its Channels broadcast service may have lead to an increase in Instagrammers using their profile to add followers to their Telegram accounts and channels.