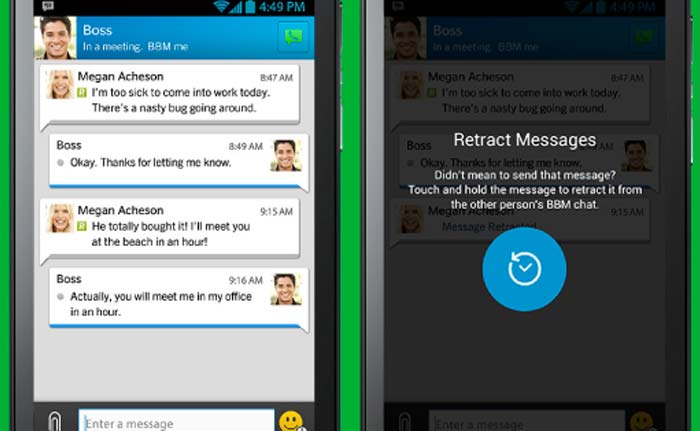 The BlackBerry Messenger or BBM as it’s fondly referred to as has just been blessed with a major update across platforms. Privacy features like Retract and Timer are its two main additions, but there are plenty of other offerings that are being added to this app as well.

While Retract allows you to pull back a sent message, Timer enables you to set a limit for how long the recipient of a messages, picture or location is able to see it. Both these traits have been part of the subscription version of BBM, but they have now been made available for everyone using the app.

The other two features that are being released for everyone are Private Chat and Edit. While the former removes names and avatars from a chat window for added privacy, the latter lets you edit messages you’ve sent to a contact. Furthermore, you are now able to forward messages from one chat to another on all the platforms BBM exists on.

The Android version of this utility has been blessed with support for Android 6.0 Marshmallow as well as the ability to mute multi-person chats. You can now scroll through all the images shared in a single chat, and save pictures taken during BBM chat to the device.

Also Read: Now Facebook too decides BlackBerry is just not worth the effort

As for the iOS version of this app, it has been granted a better looking chat screen and the ability to share larger videos than before. A multi-select mode enables users to delete, retract or forward multiple messages at once, whereas saving pictures to the device has also been enabled on iOS.

And then there’s the BlackBerry 10 version BBM which has been updated as well. It includes the ability to delete messages from just your view of the chat, the facility to retract and edit messages in group chats and an option to retract all messages in a chat when it ends.

The updates to all three versions of BBM are live now, but they may take some time to arrive on your devices.