Google Keep, the cross-platform note-taking app which is used by a large number of Android users, has just been blessed with a fresh update. This interesting upgrade equips the app with the ability to let you draw stuff on your documents, rather than just typing it out.

The functionality hasn’t exactly been aimed at serious artists, as it contains just a few basic features that include three pen sizes, a small range of colors, an eraser and a selection tool. Google Keep users will hence be able to use it as an easy platform for sketching out their ideas quickly.

This feature will work incredibly well for devices that come with styluses, like the Galaxy Note handsets. However, their makers tend to already equip such smartphones with note-taking apps bearing the drawing function, leaving no need for them to download Google Keep. 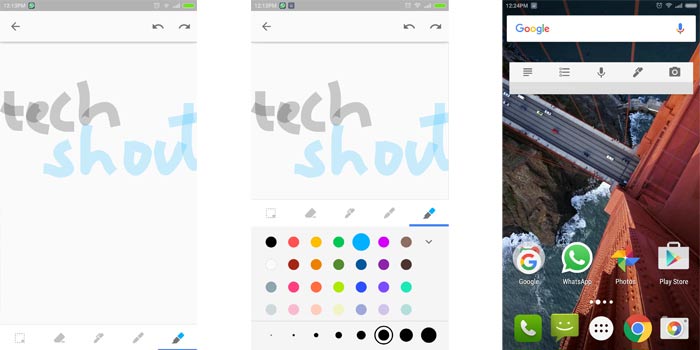 In order to create a new note in the freshly updated application, you can click on the new marker icon on the homepage. The pen, eraser and other tools can be found at the bottom, and you’ll need to double-tap on them to reveal their secondary functions.

At the top-right corner, you’ll find the useful ‘undo’ and ‘redo’ buttons as well. Following the Google Keep update, its widget too will start sporting the new marker icon that takes you into the drawing feature. You can even draw on images that you import into Keep which is pretty neat.

Also Read: Google Keep gets social, lets you share your notes with other users in real-time

This Google Keep update is being rolled out currently via the Play store, but it might take time to reach your devices. If you’re eager to try it out, you can grab its APK file (via Android Police) right now.