Cortana, Microsoft’s answer to Google Now and Siri, is now available for Android devices as part of an official public beta program. The catch is that this release is limited to the United States for now, but the company has promised that it will be rolled out into other markets in the near future.

The Cortana app on Android is sort of a companion for the same utility on a Windows 10 PC. It’s not mandatory for you to have the latter in order for it to work, but using it across platforms enhances its offerings furthermore.

For those unaware, Cortana is a voice-based personal digital assistant that can make your tasks pretty easy with its nifty abilities. You can make use of it for setting alarms, placing phone calls, sending messages and more. It employs Microsoft’s Bing search engine in order to complete your tasks. 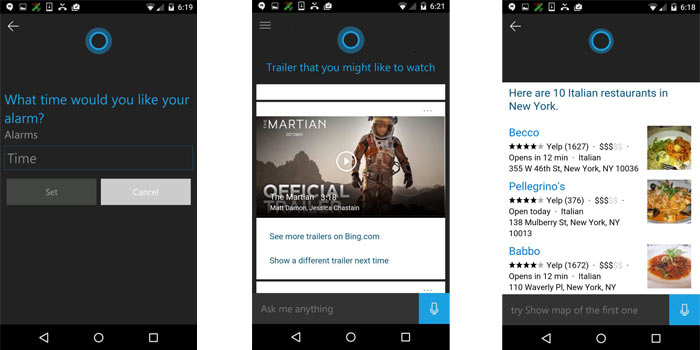 Named after the fictional artificial intelligence character in the Halo video game franchise, Cortana was first launched for the Windows Phone platform, but made its way onto PCs through the new Windows 10 update. It’s also supposed to be released for iOS devices in months to come.

Its Android version has a few limitations in its functionality. Prime among them is the lack of the hands-free ‘Hey Cortana’ command which allows you to launch the app from any screen. Moreover, toggling settings and opening apps using the assistant has also been kept out of this version.

If you’re from the US and are willing to become a beta tester for the Android version of Cortana, you can download it through the Play store right now.