A fresh new look has started being sported by the Google Play store, allowing owners of Android devices to have an even more enhanced experience while browsing for apps and other content. This makeover is characterized by the reduction of the number of categories and an altered overall appearance, among other things.

This makeover was already being teased since last week; so it’s no surprise to see in pop up on Android devices now. It should be noted that although the new Google Play store has begun its rollout towards all Android gadgets, it could take some time to land on yours owing to the fact that such releases take place in a region by region manner.

As you can see in the image right below, the most notable change in the fresh version of the Play store is its new UI. The button placements on the home page have been shuffled, and they are now curved rather than rectangular. 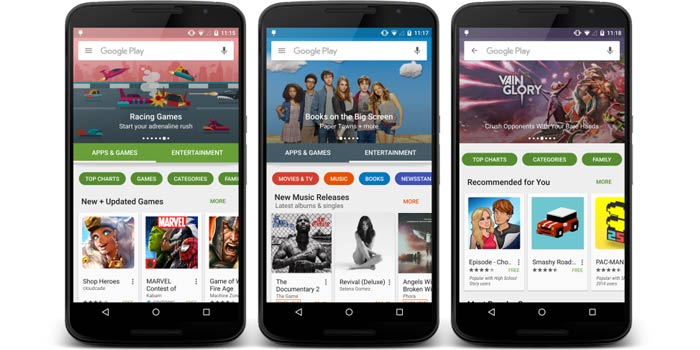 More space than ever has been dedicated for images and featured products at the top of the home page. App recommendations can still be seen resting in their little white boxes at the bottom.

As pointed out by Android Authority, the fresh version of Google’s download platform combines all its different categories into two main ones namely, Apps & Games and Entertainment. While the first category is pretty self-explanatory, the second one brings under its purview the Books, Movies & TV and Music sections.

Like we said, don’t be surprised if the new look Google Play store hasn’t started showing up for you yet, as it usually takes take a few days for the rollout to reach certain territories.