BlackBerry is trying very hard to keep up the relevance of its BBM platform, and its latest attempt at doing this has opened up gates for users to send and receive money via PayPal. It’s a pretty simple functionality that lets you transfer money to the account of someone you’re chatting with.

All you need to do in order to get going is connect your PayPal account with BBM. It should be noted that the person you wish to send money to should also have their account linked. And there’s no need for the PayPal app to be present on your device in order to take advantage of this service.

This fresh feature will work across platforms, with iOS, Android and BlackBerry versions of BBM under its purview. The Windows Phone edition has been left in the lurch as usual. An external beta version of this feature has begun rolling out in Canada today, but it will be reaching other markets in the coming weeks. 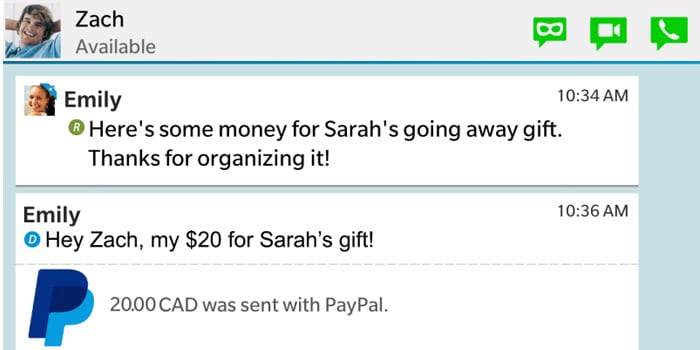 BlackBerry has said that this trait is fairly simple to use. Once you’ve connected your account you can just directly tap the PayPal icon in BBM, enter the amount of money you wish to send, review the details and hit send. The person at the other end will then be notified about the money that has arrived in their account.

Like we said, this new BBM feature which lets you send money to your friends via PayPal works irrespective of platforms, and is available with the BlackBerry, Android and iOS versions of the popular instant messaging app. A beta is currently available to select users in Canada.